Let's take a step back in history today to commemorate the birth on this date in 1688 of Emanuel Swedenborg (depicted here), the Swedish scientist and Christian mystic after whom the Swedenborgian Church, which still exists, is named. 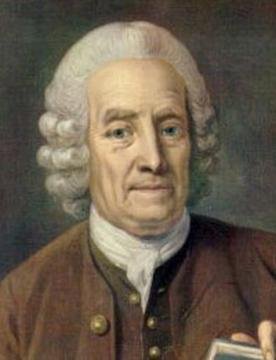 While you're at the Swedenborgian Church site to which I've linked you in the previous paragraph, you might want to have a look at the section on church beliefs. You will find there this awkward and ungrammatical definition of the Holy Trinity: "The Christian trinity of Father, Son, and Holy Spirit are aspects of God just as soul, body, and activities are aspects of each one of us."

I don't intend to get into a long explanation of the Trinity here today, but I would note that most well-educated traditional Christians would have a bit of trouble with the idea of Father, Son and Holy Spirit being "aspects" of God. Traditional Christianity would say that Father, Son and Holy Spirit are distinct eternally existing persons within the Godhead and that each is God, making for a total of one God. The Trinity, in orthodox (lower case "o") theology, reflects the internal, communal life of God. As I read the Swedenborgian explanation of the Trinity, it borders on -- if not becomes -- what theologians call "modalism," usually considered a heresy. If you think that's an unfair or distorted explanation of Swedenborgian theology, e-mail me your thoughts.

Swedenborg did not start a church himself and, in fact, was buried in the Swedish Church. Later, in 1908, his body was removed to Uppsala Cathedral. But after his death, Swedenborg societies formed to study his thinking, and eventually they created the New Jerusalem Church in London in 1787.

Religious history is full of such fascinating characters as Swedenborg, and we impoverish ourselves when we ignore or never know about them.

A man arrested in Colorado (not a Swedenborgian, as far as I know) says marijuana is part of his religion. This is the kind of thing you're likely to say when you make marijuana part of your religion.

NOTICE: Cardinal Christoph Schönborn, archbishop of Vienna, will visit Benedictine College in Atchison, Kan., on Sunday. First he will celebrate the noon Mass in St. Benedict’s Abbey Church there. Then he will offer a lecture, "Pope Benedict, Regensburg, and the Controversy of Creation and Evolution," at 2:30 p.m. in the College’s O’Malley-McAllister Auditorium. For details, click here.