So on a recent Sunday morning, my co-author Rabbi Jacques Cukierkorn, and I preached at both services at St. John's United Methodist Church in Kansas City and spoke at the education hour between those services. 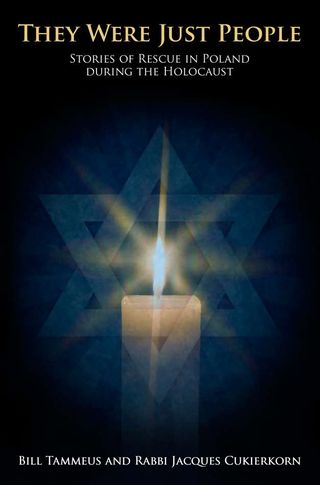 Our topic was rooted in our new book, They Were Just People: Stories of Rescue in Poland During the Holocaust. And we had some books available for people to purchase.

In four instances, people told us they wanted a book but didn't have enough money with them and no checks.

Jacques decided the right thing to do was to give them a book with his business card and trust them to mail him a check.

The next day was a holiday with no mail service. So the earliest any of them could have put a check in the mail was Tuesday. On Wednesday, Jacques called me to announce that all four checks had arrived.

He was impressed. But beyond that he said that in the end religion for him is not this nuanced doctrine versus that nuanced doctrine but much more about how we treat each other. He believes that one day God will ask him what he did in life to increase trust among people. And he will be able to tell God about this experience.

In turn, my take was that I would expect nothing less from Methodists.

But I agree that if our religions don't transform us and make us trustworthy people of integrity, they either aren't much good or we aren't paying enough attention.

AND JUST FYI: I'll be speaking twice at events this weekend. At 7 p.m. on Saturday, Jan. 30, I'll be speaking to the Kansas City Freethinkers group at the Black Dog Cafe, 12815 W. 87th St. Parkway, Lenexa, Kan. The subject will be what the Bible really says about homosexuality. And at 9 a.m. on Sunday, Jan. 31, I'll be speaking to the Witherspoon Class of Second Presbyterian Church on "The Christian Funeral: How We Get It Wrong." For a complete list of where I'll be speaking, click on the "Where's Bill Speaking?" link under the "Check this out" headline on the right side of this page.

FORGIVE ME, FATHER, FOR I FAILED TO RT YOUR TWEET

Last summer at Ghost Ranch in northern New Mexico I taught a class in which I tried to encourage people of faith to use the new social networking tools as channels for their prophetic voices. Even Pope Benedict XVI seems to have gotten the message. He's just urged Catholic priests to use blogs, Facebook, Twitter and other tools to communicate with the world. Good idea.

P.S.: My latest column in The Presbyterian Outlook now is online. To read it, click here. For previous Outlook columns, look under the "Check this out" headline on the right side of this page.

ANOTHER P.S.: From 7 to 9 p.m. on Thursday, Feb. 18, I'll be teaching a Communiversity class on essay writing at in the Witherspoon Room of Second Presbyterian Church, 55th and Oak. For the Communiversity catalog entry about the class, click here and then scroll down to page 14.