LOS ALAMOS, N.M. -- We now are more than 64 years since the first testing and first use of the atomic bomb, created by scientists secretly at work here on the Manhattan Project. 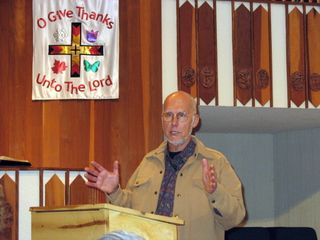 And the question before us is this: Can nuclear science (which includes nuclear energy, nuclear medicine and nuclear weapons) be used in the service of humanity? Or will we get it wrong and use nuclear science for destructive purposes?

That at least was the question considered here last week at a "God and the Bomb" retreat, and addressed specifically by Dr. Larry Rasmussen (pictured here), the Reinhold Niebuhr Professor emeritus of social ethics at Union Theological Seminary in New York.

Larry serves on the board of Ghost Ranch with my wife. While that board was meeting at the ranch in nearby Abiquiu, Larry slipped away to give this talk in Los Alamos and I drove over to hear him speak at Bethlehem Lutheran Church.

He was not optimistic about humanity's ability to use nuclear science only for good: "I have grave doubts about human beings being able to handle these powers well in the service of society." He rooted that view to a large extent in theologian H. Reinhold Niebuhr's thinking about the nature of power.

Before I get to some of Niebuhr's thoughts and why they have influenced Rasmussen, let me tell you that when Larry looked at the exploitive and destructive way humanity has treated nature since the start of the industrial revolution, he placed part of the blame on religion, particularly the Christian church:

"The churches," he said, "didn't ask what God's creation needs for life beyond service to humans." That is, religious leaders often were so caught up in a theology that encouraged humans to have dominion over nature that they failed to ask what damage this dominion was doing to nature's ability to sustain itself.

This, he said, has produced disaster because "planetary health is primary. Human health is derivative," meaning that human health finally is dependent on the health of the Earth. The problem, he said, is that when humans seek first and foremost to dominate nature, they simultaneously destroy it.

This power of domination raises profound questions about humanity's ability to sustain itself over the long haul, questions associated with some of Niebuhr's concerns.

Niebuhr, for instance, asserted that once power is inordinate, no ethical force has the power to stop it. And evil and injustice flow from such an imbalance of power, he believed.

Worse, said Niebuhr, the institutionalized power of privilege is often more covert than overt, making it appear to be nonviolent. One way to challenge power is through democracy, he said, but votes mean little of they can be bought. Rather, true and effective democracy must be based on the values of freedom, equality and community. The human capacity for justice, Niebuhr concluded, makes democracy possible, but humanity's bent toward injustice makes it necessary.

It was also Niebuhr's conclusion, Larry said, that powerful democratic nations often suffer from naiveté and self-delusion. Sometimes religion can provide a check against such results, but not when religious pride fosters extremism and absolutism, Niebuhr believed.

And Niebuhr concluded that all human knowledge is ideologically tainted because it's always partial.

Given all of Niebuhr's cautions about power, Larry Rasmussen is not especially hopeful that human beings can, in the long run, harness nuclear science to serve humanity instead of doing it great harm or even destroying it.

I'd like to think he's wrong, but my instincts and my theological understanding of human nature tell me he's right.

Pope Benedict XVI, noting new and horrifying statistics about world hunger, says the problem is so bad that displays of opulence no longer are acceptable. Indeed, things seem out of balance in this regard, especially in our culture, where you find lavishly decorated huge homes not far from where homeless people starve. But perhaps the pope's message would have been heard more clearly had he acknowledged the widespread perception that the Vatican itself is a display of unnecessary opulence. Oh, and click here to read a response to the new hunger statistics from the director of the world hunger program for the Evangelical Lutheran Church in America.

A fascintating article, Bill, and, as some may know, a subject I am very interested in.

But before we place too much blame on religion, lets remember that all the key scientists in the development of "the bomb" were atheists.

And it was the atheist Robert Oppenheimer who famously declared "The scientists have blood on their hands."

But I have not found an atheist who will admit it; they seem to think that no matter WHAT happens, atheism had nothing to do with it; they have insultated themselves from all responsibility and set themselves up in a non falsifiable position. (And for those who understand the Scientific Method, non falsifiability is not a compliment.)

In other words; they can do and say ANYTHING but have no ethical responsibility; backed up by the concepts that THERE IS NO TRUTH (or, as their allies say, we must keep searching...always...for it and we could be wrong about ANYTING and EVERYTHING) and that MORALS ARE RELATIVE.

The last two points, when combined with Scientific Advances, are setting us up for what the Bible calls "Armageddon".