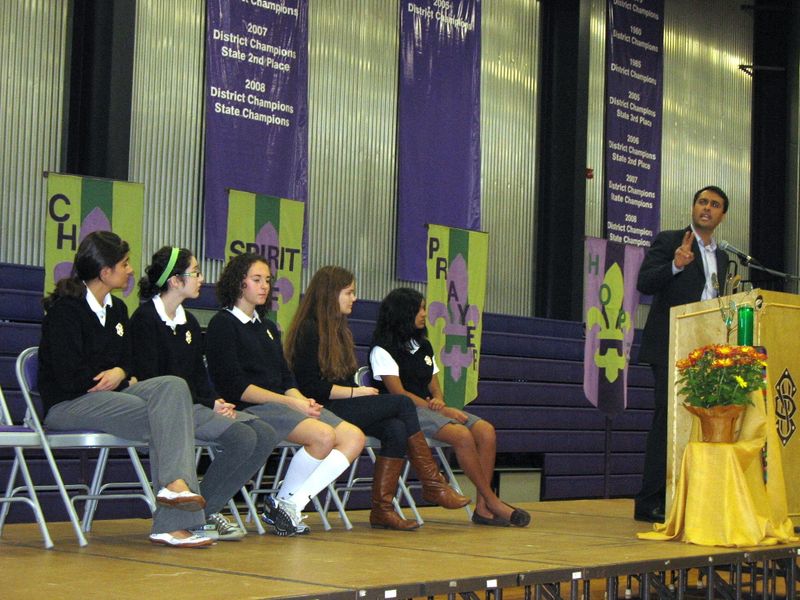 After the visit to Kansas City on Tuesday of Eboo Patel, founder and executive director of the Interfaith Youth Core, I am more convinced than ever that one of the great tasks of Americans in this century is to be models for interfaith cooperation and understanding. 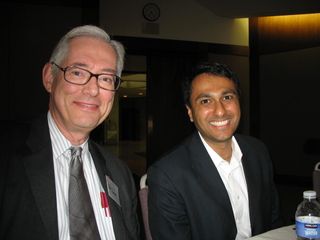 The United States is the most religiously diverse nation in world history, Patel noted. We thus have the chance to show the rest of the world that sectarian violence is unnecessary. We can -- and we must -- live in harmony. But that will not happen without strong and educated leadership.

The good news is that in Kansas City young people have begun to catch Patel's vision and are becoming engaged through the Interfaith Youth Alliance, which is working in partnership with the Greater Kansas City Interfaith Council.

The top picture here today shows Patel speaking to a gymnasium full of students at Notre Dame de Sion High School, with several of the leaders of the Interfaith Youth Alliance on the stage with him. By the way, the girls seated there are, from left to right, Muslim, Jewish, Catholic, Presbyterian and Hindu.

(The other photo here shows Patel with some guy he got stuck eating dinner with Tuesday night at Beth Shalom, where he spoke and where I moderated the Q&A after that. That's shown in the bottom photo.)

To hear Patel's half-hour talk to the Sion students, click on this link (the recording begins a few seconds into his talk when he's speaking about Martin Luther King Jr. and Mahatma Gandhi):

In the next audio clip, Patel takes about two minutes to describe his hopes for what happens in Kansas City to further interfaith understanding and cooperation. He spoke at a luncheon at the home of Gayle and Bruce Krigel:

Finally, I want to share with you an audio clip from Patel's Festival of Faiths keynote address. It runs about 48 minutes (and begins a few seconds into his description of a violent incident a few years ago in Jersey City, N.J.:

Let me summarize a few of Patel's main points from his three appearances:

* Everyone, especially young people, should be able to cite the sacred writings and the human heroes who inspire you to become engaged in services to others and to interfaith cooperation.

* "The most important ethic of the 21st Century is the ethic of pluralism, the ethic of cooperation." Don't categorize radicals by their alleged religious identity. Rather, decide whether people are in favor of pluralism or extremism, regardless of the religion they claim.

* Every religion makes exclusive claims. That's not the problem. Neither is the problem seeking to convert others. The problem is when that's the only conversation people want to have.

* "The extremists of all traditions belong to one tradition, the tradition of extremism."

* Helpful interfaith leaders know their own tradition and they know the religion of others well enough to talk intelligently about it.

* "Deep in our history, our Founding Fathers had a sense of religious diversity and understood the power of interfaith cooperation."

I hope you'll listen to at least some of what I've given you today of Patel. More, I hope you'll engage in interfaith work yourself, whether you're a person of faith or a nobeliever. It almost certainly will deepen your commitment to your own tradition.

And for other still-to-come events in this year's KC Festival of Faiths, click here. 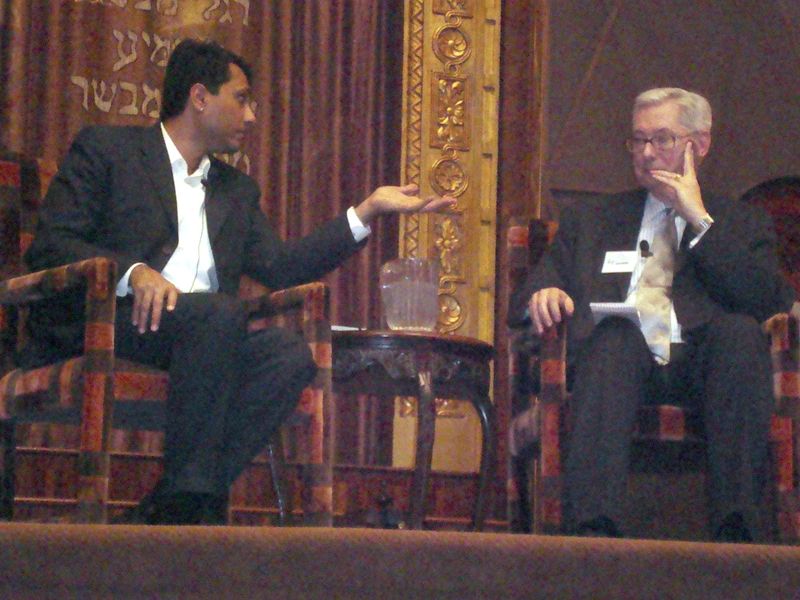 ABIQUIU, N.M. -- When I taught a class here at Ghost Ranch last summer in which I tried to introduce people of faith to social networking tools, I should have had with me the French bishop quoted in this story. He is telling the Vatican to get out of its cloister and start communicating more in cyberspace. Exactly.

P.S.: Until Monday, my Internet access may be unreliable. Thanks for your patience in getting your comments published. In fact, any comments left here on Saturday night or Sunday won't get posted until Monday. Bill.

Susan, I see you want to consider seeing if your 9 year old wants to get involved with the intefaith youth alliance.

Careful! Your hero Daniel Denniet might consider that abuse!

Howevev, I see you wanted to take your kids to the atheist meetup at Black Dog. Seriously, do you think they could get a lot of benefit from reading some of the awful things Cole and Iggy write here?

I accepted in 1971 about the Noah/Atlantis Planetary Flood. Around 1976, that Earth was Colonized, by our High Tech Human Ancestors.

Now I 'finally' accept 144,000 High Tech Celibate Virgin Males, were brought to Earth. And then Female clones were Reproduced from the Male Ribs, in the High Tech Lab in the Garden of Eden.

I accept our God/Us Asexual Human Ancestors will return to Earth before it Dies, and also take 144,000 Virgin Males, Recorded in Revelation, to a New Planet like they did on Earth.

I explained before that the New Jerusalem, is a Spaceship City, descending down from Space. It can Transport the Saved 144,000 Celibate Males to the New Planet.

Revelation 21:2a,3 KJV. "And I John saw the holy city, new Jerusalem, coming down from God out of heaven, - And I heard a great voice out of heaven saying, Behold, the tabernacle of God is with men, and he will dwell with them, and they shall be his people, and God himself shall be with them, and be their God."

God/Us is Human, not Spirit, and will be the Leader of the New Group. Jesus is also with this 'God' and will also be a leader like Adam was. Jesus is Alive, and in training for 2,000 years Earth time, and 2 Days Space Time. Jesus will be in Charge like Adam was on our Planet.

Now I wonder what Skin Color the Human Virgin Males were that came to Earth. Were they all One Color. Were they all the Colors we have today, made by Body Birth Genetic Misbreeding?

Will the Saved Males be All the Colors we have today? What Color Skin did God have. What Skin Color did Jesus have? When he was Regenerated to Purebred did he get the Skin Color of our High Tech Ancestors?

High Tech Understanding of Scripture and Myth, is more exciting than Mysterious Spirit Gods in our 'Image'.

The New President of the European Union will solve all our problems soon.

In the meantime, here is the Richard Dawkins plan.

This got in yesterday's blog. I keep doing that !
It seems to me that one of the problems with successful interfaith dialogue, are the divisions wihin the religions themselves. I'm presently reading Marching Toward Hell: America and Islam after Iraq by Michael Scheur, in which he comments on the complete lack of understanding (by America) of the historic confrontation between Shia and Sunni Moslems - groups who appear, entirely content - as events in Iraq have shown - to blow up one another's mosques with impunity !

I'd like to know if Eboo Patel addressed this issue as a problem within his own faith here in America, and whether in the U.S. this antipathy is still going within his religion here, and what they are doing about it.

Seems as if (and I may be entirely wrong about this) that it is the Sunni side of Islam that is encouraging the present world wide spate of suicide bombers but not the Shia, as much, if at all.

It's always seemed to me that the Sunni/Shia split resembles in many respects the historic Catholic/Protestant split although they happened for different reasons, of course.

Can't say that the Shia beating their backs into a pulp, as a mourning ritual for a long dead leader, is any more appealing (to me) than symbolically eating body and drinking blood in remembrance of a long dead Jesus. But there are similarities there.