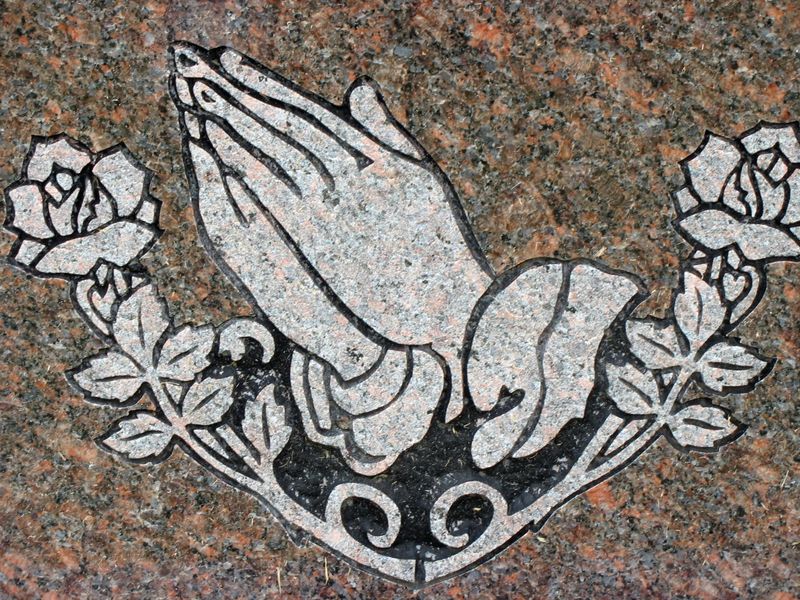 As I do periodically, the other day I walked through the three cemeteries that are near my home, and this time I tried to pay attention to the variety of religious symbols found there on the headstones.

As a Christian, it was pretty easy for me to recognize the symbols, though, of course, I had no idea exactly what the people who placed them there wanted me to know about them or about the people buried there.

In the two Christian cemeteries, as you might imagine, there were crosses galore -- and various kinds of crosses, too, as you can see from these photos.

But also prominent were the initials IHS, which you often also see in Christian churches. There are two common explanations for them. One is that they are the first three letters of the Greek name for Jesus, Iota, Eta, Sygma. The Greek name is ΙΗΣΟΥΣ.

A lamb, of course, symbolizes the "lamb of God," Christ Jesus. Or may simply be a way of referring to "our little lamb," a child who died.

A dove is a standard symbol of the Holy Spirit in Christian Trinitarian theology.

And then sometimes more secular markers are used to say something about the person buried there, such as the symbol below here indicating the person died of AIDS.

In the Jewish cemetery near my house, almost all the headstones are flat to the ground and carry no symbols at all, only the named of the person buried there along with his or her dates of birth and death.

(That's what's shown in the photo below.) But the lack of symbols there is mostly just the policy of the cemetery, not because Judaism forbids such symbols on graves. Indeed, I've been to Jewish cemeteries, here and in Poland, where the grave markers contain many different symbols. Two standard ones are a jar for someone connected to the Levites and hands for someone connected to the Cohanim. 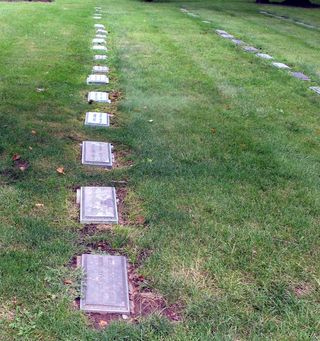 Well, we use art in many ways to express things that sometimes words can't adequately cover, and perhaps nowhere is there such an eternal or final effort at expressing religious ideas in that way as in cemeteries.

CONWAY, Ark. -- So as we're traveling through here yesterday I picked up a copy of the Log Cabin Democrat and read this story about the arrest of a man who said he was on a mission from God to stop evildoers "by shooting them in the face." Lordy, lordy. Why does mental instability so often seem to require enlisting God as a co-conspiritor? What's that about, anyway?

NOTE: Until Monday, Aug. 24, my Internet access may be sporadic or even non-existent for hours at a time or even longer. So it may take longer than usual to get your comments posted. Thanks for your patience. Bill

"Cole introduced the hypothesis of an "alien egg" laid in the brains of adamh/Will Graham. I further support it with express understanding that it is actually an "invisible alien egg" - it cannot be seen (just like the space alien who laid it) but can be observed through the actions of the "crazies"

And he expects us to take him seriously?