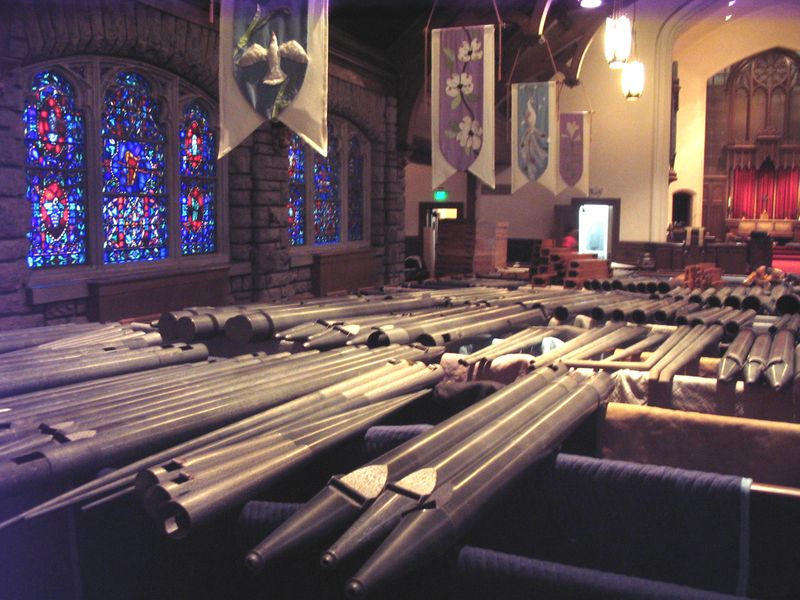 A few days after the pipe organ at my church had been removed and hauled off on a huge truck back and taken east for a major renovation, I spoke to a banquet of the local chapter of the American Guild of Organists.

And all of that has me thinking about the place of music in worship.

Well, in my Protestant tradition, the place of music is, if not central, quite important, and in churches such as mine, a pipe organ plays a vital role in creating that music.

As I told the guild of organists here, I'm the wrong Tammeus kid to be talking about this. My oldest sister, Karin, is a Juilliard pipe organ graduate and she plays and teaches in the Bay Area. But she doesn't write this blog and she wasn't the one invited to speak to the organists' guild, so I'll say a few words about all of that and she can read it if she wants to.

First, I want to tell you what you already can see from this photo (by Marsha Kirsch of our church office staff) of the sanctuary at my church when the pipes were being un-installed for shipping: Holy cow. What a complex instrument a pipe organ is. When disassembled, it fills a church. When assembled, it can fill a church with astonishing sounds.

I suggested to the organists that they remember that most of the people hearing their music are musically untrained. But the ignorance of an audience does not mean organists should lower their standards, only that they must be aware of the way what they produce is often received.

The lesson, I told the organists, is to remember that musical art is art only if it somehow speaks to the silence that lies at the epicenter of our souls, the silence that snuffs out words as inadequate intruders on truth.

Indeed, music is one of the best arguments I know that humans are not just physical beings but also have an equally real spiritual dimension. Wholly consummated music finds the cycles humming deep inside our vulnerability and resonates with the essence of our beings. It can give us new spiritual eyes and let us see new possibilities or, at least, renew old, moribund possibilities.

And for me, the pipe organ is a central source of such music. While my church's organ is gone, we're using both a piano and a synthesizer. They're fine temporarily. But I can't wait for our refurbished organ to return to us by the Christmas season.

Several years ago I heard journalist Asra Nomani speak to a small group of journalists in Washington, D.C., and then I read her book, Standing Alone in Mecca. She's a fascinating and refreshing Muslim voice who is seeking to bring change to Islam. The "On Faith" blog of the Washington Post is featuring this interview with Nomani in preparation for an upcoming documentary. Give a listen.

This is for those who don't follow links on this sight.

Hey Red, note he agrees with me - atheism is a religion.

From Will Graham's link -

"And then there's the question of why atheists are so intent on trying to prove that God not only doesn't exist but is evil to boot. Dawkins, writing in "The God Delusion," accuses the deity of being a "petty, unjust, unforgiving control freak" as well as a "misogynistic, homophobic, racist ... bully." If there is no God -- and you'd be way beyond stupid to think differently -- why does it matter whether he's good or evil?"

They have YOU and ICKY pegged exactly.

Thank you Susan for your support.

Adamh - I'm glad you find my blog name hilarious. I find it useful when playing computer games like Star Wars.

I was actually named after the Queen. Make something of that kid !

And let me again suggest Vox Day, author of the Irrational Atheist, http://www.voxday.net/ for an excellent slapdown of the New Atheists. Of course Cole and ICKY have all the (canned) responses to this so be ready.

You were posting about Madeleine L'Engle the other day. I loved her book, "Wrinkle in Time" and I was wondering if you've discovered the delightful childrens books of Phillip Pullman yet ?

They made a movie of "The Golden Compass",last year which was from the first of the "His Dark Materials" series. The other two books in the series are "The Subtle Knife" and "The Amber Spyglass". Pullman's a super story teller - very popular in England.