THE HEADACHES OF CHURCH LEADERSHIP

If you become leader of a big organization you can expect to be handling trouble. Take Pope Benedict XVI, for example, who now has to figure out what to do about two nuns who chained themselves to the Vatican on Sunday to protest their treatment by their convent. Is there a particularly religious or even Catholic way he should handle this versus the way a the CEO of a secular company might? I think he has some obligations to truth and compassion that should mark his handling of this case. It'll be intriguing to see if we learn what he did.

IN MEMORY OF ST. COLUMBA

I've been to Scotland only once in my life, when I was a boy. But I mean to go back and, while I'm there, I mean to visit the Iona Community on the Isle of Iona. 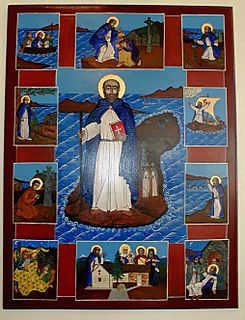 Some youngsters from my church had a chance to spend some time there a couple of years back, led by our senior pastor, who came to us from a pastorate in Scotland, though he's actually a native of Northern Ireland.

Today is just the right day to dream about going to the Isle of Iona because it was on this date in 597 that St. Columba (depicted here), the pioneer missionary to Scotland who used Iona as his base, died. From Iona, Columba, an Irish native, evangelized Scotland's mainland as well as Northumbria. He was established his monastic outpost in the 560s.

Today the Iona Community is home to the Wild Goose Resource Group, which produces new music, liturgy and other worship aids for churches around the world. One of the leaders of the group, John Bell, has spoken at my church.

The conventional wisdom says the church in Europe is dead. But Europe also is the source of such renewal efforts as the Wild Goose group, which is having an effect around the world. So the picture is more complicated than just large, empty European cathedrals.

Have a look at the Iona site today. And then let's picture ourselves there in person within the next few years.

Good for the elderly nuns.

Even a CEO might be seen on the street, listening to the nuns and doing a little PR work. I suppose that the Pope avoids such gestures, so as not to encourage others to chain themselves to the Vatican gates, however, it seems that the response of the leader of a religious organization should be to get personally involved and work out a humane solution.

The fact that the hierarchy of the Catholic Church is male, speaks to its lack of concern regarding human rights. Period.

So the nuns were evicted because they were suspected of having a man in the convent. I can see how that would be the most repugnant thing to the average high-heeled-priest--it must just sicken those priests to even think of hetereossexual relations between legal-aged adults.

It's just a power grab with the nuns, but the Vatican can't give in. If the Pope gives in on this one, then the next thing you know those nuns will be wanting to wear pretty dresses, ruby red slippers, and bling like the Pope. Who knows, there could even wind up being a shortage of underage boys to 'relate' to if the nuns start gaining power. There's just no end to the corruption that could result from giving women power in the Catholic high-heeled-boys priesthood.

Those nuns chaining themselves up isn't going to work either. Wrong kind of bait.

Why do more people search for the Dalai Lama? I'd like to think it is because of his teachings, but it's more likely that they are seeking info on 'who he is' because of the recent uprising in Tibet.
--------------
Next weekend are the Scottish Games at Zeke Young Park, Riverside, MO. For those interested in Scotland, beyond religion.

The nuns weren't accused of SEX with the man, JT (the women were 73 and 79). They were accused of giving the man convent funds.

"The ANSA news agency cited articles from local media claiming the two women were evicted after an inspection by church authorities revealed the presence of a man in the convent." The issue was finding a man in the convent. Everything about money was just a later rumor, a "suggestion."

You missed the point of my remarks. What was the big deal about having a man in the convent? It broke their little rules. It endagered people? You can insinuate whatever you want at that point because the whole thing is ridiculous. What? Were they worried about the nuns having sex? No doubt that would be enough: the mere thought of a consenting, adult heterosexual relationship would be enough for pervert priests to hike up their skirts and go running and screaming back to the rectory.

It is absolutely absurd that finding a man in the convent or even having some of the funds extorted would exile elderly nuns. A priest can diddle with the children and squander millions through lawsuits, but still retire in the Vatican. When was the last time a priest was thrown out like that? The whole picture of that Church and the way it wields its power against women and children is repulsive, especially when contrasted with how it will defend at all costs its high-heeled-boys priesthood. Everyone except priests are mere canon (or cannon) fodder who can be marginalized and dismissed with one flick of a Papal wad. There was no compelling reason for them to do what they did, but they were "just nuns," lesser beings on the Catholic scale. Children also rank low on the canon fodder scale.

You really should go to Iona and stay with the community. It is a blessed experience.

Until Genesis is Accept as Literal High Tech Science Knowledge, Sexual Orientation of the male as the dominant gender will continue. Genesis shows Adam and Eve were Equal Male and Female Gender Clones, the female made from the male rib. They were Brother/Sister Helpmeets, not mates.

Today we call that type of Reproduction, Cloning. The Other Half of a couple that Body Birth males and females are looking for in a Mate, cannot be found, with each male and female reproduced by Unequal Heterosexual Body Birth.

So Fallen Human Mates have reproduced all the Genetic and Physical Mis-bred Humans ever since. And Humans have looked for their Equal other half ever since. And Sexual Gender has been argued about ever since, the Asexuals reproduced Heterosexuals, Bisexuals, Homosexuals and Transsexuals..

Religion started, after the Fall to Body Birth Reproduction, and male and females were separated in separate housing, for their God/Lord. Celibacy was as close as they could come to the Original Asexual Clones.

So Original Sin made a Population explosion, that is smothering the Planet with Mis-bred Human, and Inequality Rages on and on, with Nuclear Bombs as the Answer to destroy this Evil.

Eternal Physical Life is for the Living, not the Dead.

Oh Lord, I hate to agree with Patricia, but she nailed this one!

"The fact that the hierarchy of the Catholic Church is male, speaks to its lack of concern regarding human rights. Period."