Speaking of interfaith dialogue, as I will be below, an all-Muslim conference on that subject opened in Saudi Arabia yesterday, but this report suggests that it exposed some internal Muslim rifts on the subject. This Saudi conference, attended by King Abdullah, is supposed to be a forerunner of a later conference involving Muslims, Christians and Jews. I trust no on is shocked that there are divisions among Muslims on this subject, just as there are divisions among Christians and among Jews. Such differences of opinion are just one reason this work so is difficult. By the way, to read the report on this Muslim gathering from the Arab News, an English-language Saudi paper,click here.

A WISE WORD OF INTERFAITH CAUTION

I have said here, in columns and in various speeches that interfaith dialogue is difficult if it's done right. If it's easy, it means the participants aren't being as forthright as is needed for everyone to understand everyone else. 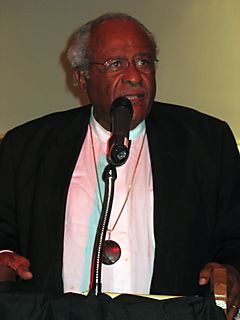 It requires honesty coupled with respect.

I was glad to hear a similar message the other evening from someone else. I attended "The Abrahamic Faiths" awards banquet sponsored by Al-Inshirah Islamic Center, a mosque near 36th and Troost whose congregation is made up predomininatly of African-Americans.

One of the award winners was the Rev. Wallace S. Hartsfield (pictured here), who retired late last year from the senior pastorate of Metropolitan Missionary Baptist Church, which he had served for several decades.

But then, in response to the announcement that area Muslims, Christians and Jews have committed to build a second Habitat for Humanity house together, he gave people an important caution:

"There's some things ahead of us that will bring about great tensions. Let us not be afraid of tension. Out of that creative tension will come newness."

Representatives of those three Abrahamic faiths last year built a Habitat house (called "The House that Abraham Builds) that I wrote a column about, and everyone found it a great experience and a chance to learn to value people of other faiths. A symposium of representatives of those faiths that was held before the dinner last week resulted in a commitment to build at least one more such house next year.

But Wallace Hartsfield was right to note that any time people of different faiths work or talk together there is the chance that tensions will arise. Being prepared for them will help, but so will knowing that working through such tensions can lead to even stronger relations among the faiths -- without any member of a particular religion having to give up his or the theology.

P.S.: Jim Wallis, editor of Sojourners Magazine and author of God's Politics and The Great Awakening, will speak in Kansas City this Sunday evening. For information on how to attend, click here.

ANOTHER P.S.: The National Religious Campaign Against Torture today is launching a campaign to get congregations across the country to display anti-torture banners. Is your congregation joining this effort? You can check by clicking here for the so-far list.

Since the Roman empire, Christian doctrines regarding the exclusivity of Christ have always been offensive to cultures with religious pluralism. ("The Christians as the Romans Saw Them" By Robert Louis Wilken)

In an article you wrote some time ago, you referred to comments made by Joseph C. Hough Jr., president of Union Theological Seminary, where he "...suggested that Christians adopt a different way of viewing other faiths. He says that simply tolerating other faiths is 'not sufficient in a world of religious pluralism.' Hough says it's important to study and understand other religions and that 'we want to be careful about claiming that one religious form is the only one that is authentic or real.'"

Isn't this a call for Christians to reject the salvific exclusivity of Christ for the purpose of promoting peace between religions? Has tolerance been redefined to require us to relinquish truth claims? Conversely, is claiming Christ as "the only path to the Father" an act of intolerance? Is it religious bigotry? Is it hate speech?

That doesn't sound like dialogue. Wilken's book describes the 'dialogue' between Roman pluralists and Christians: Justin Martyr responds to Clesus and Augustine to Porphyry. Isn't dialogue supposed to be a tool for determining truth? Perhaps it is too much to ask for that kind of honest dialogue without someone picking up a gun or hijacking an airliner.

Both the pantheistic Romans and the Christians wanted to maintain civil order, and promote virtue. But the Romans saw the Christian claim of exclusivity as undermining the civil religion which was the basis for their civil society. As the US has become more religiously pluralistic, the old Roman criticism of Christians seems to be returning. It seems likely that Christians like myself will be increasingly seen as intolerant and even religious bigots.