The question of which Catholic politicians have a "pure heart" (Pope Benedict XVI's words) that allows them to take Communion goes beyond the United States. As this report notes, it also involves Italy's prime minister. I like what the former bishop of the Kansas City-St. Joseph Diocese once told me, which is that he found it impossible to judge the heart of anyone coming forward for Communion.

Are you familiar with Howard Thurman (pictured here)? 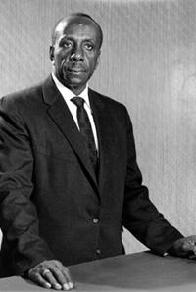 He was one of the great 20th century Christian theologians, and the other evening I met Arleigh Prelow, who is making a documentary movie about him, to be called "Howard Thurman: In Search of Common Ground."

Arleigh, who lives in California, was in Kansas City to speak about her project and to try to secure some final funding to assure the project's future.

Thurman was born in Florida and, even at an early age, began to search for ways to bring people of diverse backgrounds together, Arleigh told me. That is, bring them together without sacrificing a commitment to one's own faith.

I feel I share some common ground with Thurman, who was born in 1899 and died in 1981, because -- at least in a geographical sense (and later in a philosophical/theological sense) -- our paths crossed. He attended seminary in Rochester, N.Y., where I first worked in the late 1960s for three years after I was graduated from the University of Missouri School of Journalism.

In the 1930s, Thurman spent time in India, where I lived for two years in the 1950s. Thurman went to meet and learn from Mahatma Gandhi, who already had been murdered by the time I got to India. Arleigh said that even though Gandhi and his nonviolent approach to social change already was known to some extent in the United States before Thurman visited India, Thurman helped to popularize that approach after he returned to the U.S., and such later civil rights leaders as Martin Luther King Jr. learned from what Thurman had learned.

There's also a Howard Thurman Center at Boston University, where he once taught and where many of his papers are archived.

I'll try to keep you posted on the progress of the film production but you also can follow it for yourself on the movie link I've given you above.

The Rev. Robert Lee Hill, pastor of Community Christian Church, who invited Arleigh to Kansas City, hopes to get her back here when the film is ready to be viewed. That would be an event worth seeing for sure.

Denying Communion to certain prominent people puts the church in the awkward position of claiming to be able to see into the hearts of all. Otherwise, their judgments are random and selective. Within the last couple months, there was a letter in the Star. The writer wondered whether, in view of the church's denying (or threatening to deny) Communion to the governor of Kansas, people should be asking how many abusive priests and the bishops who covered up for them are still taking Communion. I thought it was a good question.

On the subject of clergy abuse, I also wonder what the Catholics and others are doing to prevent it in countries other than the United States. Bill, in your extensive reading, have you seen anything about that?

Since the 1990s, there have been problems for Politicians in their religions, for taking Communion, when their political views differ from their religion.

Communion is a special religious rite, like Baptism. There are many different ways to celebrate this today. Some churches have Close/Closed Communion, where only confirmed members can receive the body and blood of Jesus. 'Take eat, this is my body'. 'Take drink, this is my blood'.

Wafers and Wine were used in my former Missouri Synod Lutheran Church. They may have added grape juice today also. When I was there over 30 years ago, we used the common cup at the altar. They were considering using small glasses. There are many changes in religious rites during the 1900s.

The Missouri Synod Lutheran Church that my sister-in-law attends, offer grape juice also, for reformed alcoholics and others that do not care for wine. They have small individual glasses.

Some Religions have Open Communion where all who attend can take it, and only use wafers and grape juice. Some religions use loaves of bread and break off pieces, and I am not sure if they use wine or grape juice.

I imagine there are as many different Communion Practices as there are different denominations. I do not Know if all relgions teach you are eating the body and blood of Jesus.

Religious rites are for people to help them Keep the Faith of their Denomination. When religion gets mixed in, with the politics of the 1900s, it does run into more problems for politicians, when the USA does not have a State religion.

In the Orthodox Church, it is up to the individual priest to commune someone or not. Of course, the bishop has a say, but most often he does not say anything.

I like this because the parish priest has an opportunity to talk with the individual and discern where that person is coming from.

Of course, every priest's standards are different. One may be super-strict or manipulative, while another may give communion to anyone in the church without making an effort to know where the person's heart is.

Finally, every Orthodox Church I've been to emphasizes that no one is worthy to receive communion, to sit at the table with Christ. It is only by grace that anyone of us is able to receive the bread of life. In this light, excommunication should only be for the healing of the soul of the individual or out of love of the community.

If you don't agree then start your own church that believes the way you do. Leave the catholic church alone. The church is not a democracy. I have started to attend the Latin Mass on the Kansas side and have finally found a group that believes what the church teaches. Not that you can't find people who believe that way at other parishes but it seems hard to find them in great number there, including unfortunately the priest. I pray both of our bishops keep up the good work. They believe the teachings and are just shepherding the flock.

"America, love it or leave it!" was just simplistic enough, stupid enough, hateful enough and jingoistic enough for people to buy into that emotionally-stunted way of looking at the world. Fortunately America has moved beyond that one-line philosophy.

It's sad when 'gogo' girls have that similiar mindless thoughts as their substitute theology in the Catholic Church. It seems to me that there are many more reasons for staying away from the Catholic Church than just disagreeing with current Catholic theology!

gogo girl, has expressed his position very well. He doesn't want the truth - he wants the mindless drivel of the HRCC. Let those who follow the devil, worship the devil.

JT..I don't see God or Christ in your post, could you please point Him out to me.

GoGo, St. Phillipine Duchesne is a great community, I hope you grow much closer to our Lord by worshiping with them.

As for the politicians..public denunciation goes along with public announcement. Rich pointed out a few great points on the level of the parish priest, but there are times when the Bishops will make a more pronounced stance.

Sin is not always directed at the individual sinner. Sin can be manifested by scandal (Scandal is a word or act which gives occasion to the spiritual ruin of one's neighbour-St.Thomas Aquinas), which is what we are seeing with so-called "pro-choice" politicians. By their actions they allow and often lead others to sin. St. Matthew's Gospel speaks about scandal in chpt.18.

ChotoCK, you do understand that the Holy Spirit of God is the Spirit of Truth, right? Seeking Truth is part of seeking God, not just sitting back and being spoon-fed someone else's regurgitated Catholicism. Or do you still cling to the idea that someone else is responsible for spoon-feeding you religious pabulum?

Did you see Bill's excellent weekend article in the KC Star about sticking with your Church even though you find imperfect people and rituals there? Did it help you understand the shallowness of the idea that euphoric experiences induced by religious incantations and incense are not what it's all about?
http://www.kansascity.com/living/columnists/bill_tammeus/story/673657.html

Ask not what your Church can do for you, ChotoCK, but what you can do for your Church. The Church is not about popes and bishops or being pawns of bishops that rook others. No, it's about serving the Body of Christ, which is the true Church.