Speaking of religion and politics, as I will be below, a writer in a journal of African-American thought has done this intriguing piece about the recent decision by Sen. Barack Obama to leave his church. By the way, I'll be talking about that decision at least indirectly in my column this Saturday. I think Obama is not done dealing with the question of his church membership.

As the second George W. Bush administration begins to draw to a close, various analysts are taking a look at what happened and why. In fact, What Happened is the name of the book about all this by former Bush press secretary Scott McClellan. 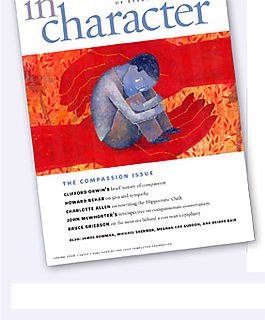 But as much as I'm interested in the wars in Iraq and Afghanistan, I've also been wondering how to evaluate what (remember this?) Bush called his "compassionate conservatism" and, growing out of that, his "faith-based initiative."

The latter, as you may know, was the president's attempt to funnel public dollars to charities with religious roots to do some of the social work that the government seems not to have done very well, if at all. I always liked the idea of these groups existing and being effective, but it worried me (and still worries me) when tax dollars are spent to advance any kind of religious ministry. That's not what public dollars are for.

But we don't hear much about compassionate conservatism these days and we rarely hear about the faith-based initiative programs, though they continue to exist in one form or another.

So I was intrigued to find this piece about all of this in a Templeton Foundation publication called In Character: A Journal of Everyday Virtues. The author, John McWhorter, works for a think tank called the Manhattan Institute. I hesitate to label such places "conservative" or "liberal" because I think such labels are misleading. You can poke around on the institute's site and decide for yourself.

But McWhorter defends Bush in this piece -- perhaps a surprising stand, especially for an African-American. I am always engaged by people who go against our suppositions. I may not agree with all McWhorter says here, but I think it's a useful vehicle to revisit the question of what role the government should play in supporting or even funding groups that have a religious base. (Pay special attention to what he has to say about programs aimed at preparing prisoners to live successfully on the outside.)

I don't want the government to be hostile to faith-based groups, and I would hope there could be areas in which they could cooperate. But, as I say, I think it's important to remember the constitutional barriers that are designed to prevent the government from directly subsidizing religious activities.

So read McWhorter and, if you're of a mind, support him or argue with him here on the blog.

P.S.: If I'm slow publishing your comments the next few days, hang in there. I'll get to them. Thanks. Bill.

It seems obvious to me what kind of faith Mr. Reeves would like Barack Obama to have, but truly it isn't Mr. Reeves' choice.

I'd say, "Let the man's faith grow." Let him seek some way to meld liberation theology and a kind of faith that bridges gaps (his natural inclination). And let the pressure his public position (along with his serious commitment to faith) puts on him do its work.

Perhaps what Obama seeks, in terms of religion, is to advance "people liberation", as opposed to "black liberation". That's not the same as siding with the white oppressors. Reeves has his own agenda, in calling for a candidate who essentially would embrace racism.

Interesting short interview with Ralph Reed on Charlie Rose last night. Rose noted that Obama might be a candidate who could genuinely connect with the evangelical voter. Reed seemed to acknowledge that potential, comparing him to a character in one of his fictional books, who had that capacity.

According to Reed, Obama met "off the record" with 40 church leaders, including Franklin Graham. At that meeting, the tough question asked of the candidate was regarding abortion and Obama seemed to acknowledge that his private feelings, regarding the issue, did not necessarily echo his actions as a peoples' representative. Apparently Obama worked the room and it's unknown what he said to individual leaders.

Anyway, Reed felt that abortion would be the problem for Obama, when it came to garnering evangelical voting, and predicted that the percentage that he would get would not be much different than the 18% that Kerry garnered.

What is Government 'Faith Based' Resources, for Faith Religions of the Human Species? Faith in Who or What? Who or What set up the Eco System on Earth, and all Life Species 'in the beginning'? 'God' or Nature?

Did the Spirit 'God' in Genesis, Reproduce Equal Male/Female, Brother/Sister Clone Human Beings, 'Supernaturally', without using Heterosexual Body Birth? Were Human Beings the Caretaker Species, in charge of Sharing Earth's Resources, Equally with all Species created by the Spirit God?

Were Brother/Sister Humans Created, To Divide Unequally, into many Race and Government Groupings? Were they to build many pagan temples by Human Hands, for Mouth Worship to the many Gods they made on Earth?

Were Brothers/Sisters to use their Hands for Competition, Unequal Sharing, Greed, Inhumanity, and the Killing of God's Living Species, Resources, and Eco System?

How many Religions are considered Good enough, to participate in Faith Based Government Money in the USA? What is Faith Based, about Brother/Sister Humans of the Same One God, Killing each other every Day, for their Needs to Exist?

Ralph Reed, Franklin Graham, and Right Wing Christians, stress Good traits for Humans, but many of their beliefs cause dissension in Government.

All citizens do not believe the same as Christians. All Citizens should be under Equal Government laws. Protestants and Atheists came to the USA, to get away from Catholic Religious Laws in Government.

All Scripture and Myth, can bring out the Whole Truth, of 'Eternal' Physical Life After High Tech Science Birth, on Planets and in Spaceships. Genesis is not about Eternal Life After Death.

Whatsoever Humans sow, that also shall they reap!
Humans sow all kind of seed to make food for for the Living. There were some breeding rules in the past, even for Humans. Today Humans are using High Tech Science to clone of animals in the Lab.

Humans also are reproducing a Fetus in the lab, without the Heterosexual Act, and remove some inherited genetic diseases.

When it comes to making Humans worldwide, there is no control on Genetic and Physical defects, handed down from Generation to Generation in each 'family', with some other seed not known about also added, like the 'milkman'.

Genesis reproduction by God, a Higher Human 'Being', made 'Supernaturally', Higher Humans 'Being' Adam and Eve Clones. Cain and Abel and all Humans since, were reproduces as Lower Human 'Beings' by Body Birth.

Our High Tech Science Knowledge Reproduction should help put a stop to Mis-breeding Heterosexuals, and then work on stopping all the Nuclear Bombs, Hate, Killing, Inequality, Greed, Inhumanity, of Humans to Humans, and Humans to All Life on earth and our Eco System.

The Living God in Genesis, is the Source of Living Humans, not Dead Humans.

Praise God and Pass the Ammunition! This was the ditty for WW2. It explains what I keep posting about. How does praising God for our using ammunition to kill our Brothers/Sisters of Life, prove Love of God?

God and Jesus were against Killing and Inequality. All Humans are involved in War and Killing, ever since Cain and Abel and all Humans, were reproduced by Body Birth.

Does that tell us anything about Fallen Humans allegiance to Country and Religion, instead of to God and our Brothers/Sisters of Life? What does it Prove, when All the religious Humans donate their time and resources, to Religions and Governments, that lead them into war and killing.

Why does their Love of God, and their Fellowman, on both sides, let them Kill each other? Is Love of God, Killing all the other Life on Earth and our Eco System? Is making weapons of massive destruction and nuclear bombs on land and sea?

Is Love of God Only For, On Sundays, or when believers need an Earthly Blessing? What does the Love of God mean on a Fallen Planet. Hope for Peace and Equality in Life After Death? Why 'is' for the Living, not the Dead.