As some Christian denominations split and certain congregations leave, there are disputes about the ownership of church property. The Pew Forum on Religion & Public Life has done this helpful interview on this subject with a law professor at George Washington University that might assist you in understanding the various ins and outs of all this.

As many of you know, I've been working on a book with a local rabbi about Jews in Poland who survived the Holocaust with help from non-Jews. (Click on the "Holocaust book project" link under "Check this out" on the right side of this page for more details.) 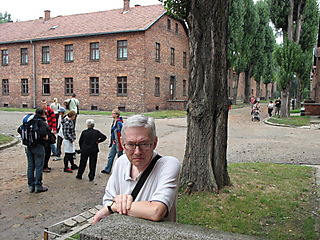 As a result, I've spent the last couple of years mostly reading Holocaust-related books. Recently, my book-writing colleague, Rabbi Jacques Cukierkorn, loaned me a book he had borrowed from the library of his seminary. It's a 1948 book by Dr. Gisella Perl called I Was a Doctor in Auschwitz.

Dr. Perl was a Jewish physician from Transylvania in Hungary, and in the spring of 1944 she and many other Jews of Hungary were rounded up. First they were forced to live in ghettos and then taken to death camps. She was sent to Auschwitz, where her skills as a medical doctor kept her alive because the Germans forced her to treat patients there in horrid conditions. Eventually she was transferred to Bergen Belsen in early 1945, from which she was liberated by the British that April. (That's me in the photo here when Rabbi Jacques and I visited Auschwitz last summer.)

But I want to focus today on just one paragraph in her book. In it, she is talking about the many babies she aborted to save their mothers, who were not allowed to give birth in Auschwitz. Being found pregnant was one more excuse to murder Jews.

"No one will ever know what it meant to me to destroy these babies," she writes. "After years and years of medical practice, childbirth was still to me the most beautiful, the greatest miracle of nature. . . Every time when kneeling down in the mud, dirt and human excrement. . .I prayed to God to help me save the mother or I would never touch a pregnant woman again. And if I had not done it, both mother and child would have been cruelly murdered. God was good to me. By a miracle, which to every doctor must sound like a fairy tale, every one of these women recovered and was able to work, which, at least for a while, saved her life."

One of the frequently asked questions about the Holocaust was "Where was God?" This woman found an answer. Would it have been your answer? Do you trust her answer? Do you understand it? Do you cheer it?

"Every time when kneeling down in the mud, dirt and human excrement..."

Operating on mothers under such conditions without fatalities seems like a miracle. But it's so hard for me to see God's hand in such a situation. If God's hand were there at all, then why would such atrocities ever occur? It leaves me deeply sad and angry to think about what happened. My mind desperately tries to find something to analyze in the noise of senselessness, but it cannot--there was no reason, and reason can tell me nothing. I am left with only a heart full of emotion, praying that God may bless all those who suffered, and praying that God will particularly bless the souls of those who risked their lives to do whatever desperate things possible to persist in love, people like Dr. Perl.

No one but someone in Dr. Perl's situation can know where he or she would find God in a concentration camp. I can only look at it from the other side. We lose sight of God when we pretend evil isn't happening, and that's true whether the evil is the holocaust, the large amount of spouse and child abuse in this country, the abuse of prisoners in places like Guantanamo, or you name the other great evils we pretend aren't happening.

I've been connected to churches in one way or another since birth, but it was late in life when it occurred to me that polity matters as much as theology in what a church is and how it expresses God's love in the world. Polity is the "what you do" part of the statement, "Often what you say is not as important as what you do."

Sometimes, even in blogs like this, we ignore the importance of polity.

The link to the legal issues regarding church property is terrific. Thank you, Bill. And your posting on the subject is likewise terrific, Joe Barone. Thank you.

Dr. Perl's story is also told in the movie "Out of the Ashes". Available at amazon.com and netflix.com

Where Was God? God does not rule Planet Earth. God is for Faith in another place, Heaven. Humans Reproduce Humans on Earth, not God. God, our Ancestors, did reproduce Perfect Brother/Sister Humans 'in the beginning', and put them in Charge of Life, but, they fell to reproducing Heterosexual Body Birth Imperfect Humans.

'Fallen' Humans have reproduced many types of Unequal Genetic and Physical Humans, not God. The Result: there are many God Faiths, to get through the Fallen Human Killing and Dying Lifestyle. Their religious goal: To Die and go to Heaven and Peace. Not the Goal: Brother, Sister Peace on Earth. They are our Life Enemies. Why?

Without High Tech Science, Fallen Humans did not Know about High Tech, Higher Human Beings, that Colonize Planets and Have Eternal Physical Life After Birth. Any religions or myths handed down, about Human Gods that walked and talked, and flew up in the air, and out into Space, were called Supernatural 'Beings', and Spirit 'Beings'.

Body Birth resulted in many divisions of Humans, into Races, Countries, Religions, etc., as they spread around the Planet. All have similar myths to form their religions, and as Humans spread, more myths and religions resulted.

So Where, Who, or What was God? And Why was God Created? Now I come along with our High Tech Science today, and say the Lord God was our High Tech Ancestors, and GOD is the Source of the Atom and Electro-Magnetic Force of All Life, who is the Unknown Maker, of the Elements that makes Humans. A Human cannot be GOD the Element Maker of Humans.

Humans even with High Tech Science, cannot Know GOD, but they can Know God, our Human Ancestors, and Jesus, Alive in Space. They will return in their Human Bodies at Judgement Day.