WILL HE USE A CONVERSION TABLE?

New Catholic Tony Blair, until recently Britain's prime minister, plans to teach religion at Yale. Do you get extra credit if you can name all the monarchs of England and the religions they followed?

The Jim Wallis-type group of progressive evangelicals, so called, is finding its voice in this presidential election, this report says. Wallis, for years, has been preaching the need for people of faith to work on issues of poverty, and now he's got a growing number of allies. Do you think this branch of evangelical Christianity will really make a difference in this election?

AN INTERFAITH GATHERING WITH THE POPE

It's reassuring that Pope Benedict XVI's April visit to the United States will include a recognition of the religious diversity that increasingly characterizes the United States. (See my recent blog posting on the new study of the American religious landscape by the Pew Forum.) 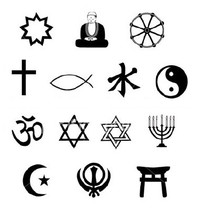 The pope will meet with representatives of several other religions when he's in Washington, D.C., in mid-April, and the focus of the talks will be what can be done to promote peace around the world.

The business of interfaith dialogue is tricky. On the one hand, this pope and the church he represents have made it clear that they believe anyone outside the Catholic faith is theologically off base and may be eternally doomed, though they might word it more gently than I just did.

On the other hand, this pope and the church he represents have made it clear that they want to do what they can to promote harmony among people of many faiths so as to avoid the kind of faith-based violence that has set parts of the globe aflame.

The question becomes how to accomplish the latter without the former being a barrier to fruitful discussions. It's not easy, and anyone who knows anything about interfaith dialogue knows it can't go anywhere without first a commitment to honesty and authenticity in representing one's own faith tradition.

I don't hold out any hope that this Washington gathering in April will result in some kind of astonishing reign of religious peace in the world. And yet I'm always hopeful when religious leaders are willing to talk instead of shutting their theological doors.

To read my latest Kansas City Star work, click here. (My Saturday column this weekend takes note of the remarkable reality that religions depend on ancient printed words.)

The issue about meetings is who's in charge. If the Pope calls the meeting at his time and his place, it is not a meeting of equals. Let the World Council of Churches or somebody call the meeting and let the Pope and all the other leaders come to them as equals in the discussion. In a way, I see the Pope's so-called reaching out (at least so far) as condescending.

To me, Tony Campolo is the ultimate socially-conscious conservative evangelical, and he's been at it a long time. People like Jerry Falwell and James Dobson just turn me off of religion, but Tony Campolo could be my preacher. I'd follow him.

I'm always hopeful that evangelical Christianity will turn its attention to a broader definition and defense of life. The article emphasizes that the key to that happening seems to be held by younger votes.

Herein lies the problem. Younger voters haven't shown traditionally that they are reliable when it comes to actually getting to the polls. I do admit that young Obama supporters seem to be well-organized when attending caucuses and voting.

I think that perhaps an accompanying question will be whether or not the Christians with anti-Choice and stopping gay unions at the top of their shopping list will be energetically behind John McCain.

Good point regarding the importance of who convenes a meeting, Joe Barone. From reading this article, it seems that what is most important are the gifts as homage to the Pope. It makes it seem very much that the meeting itself will be as symbolic a gesture as the "things" themselves.

There is a free 88-page excerpt for free download from Deepak Chopra's book, "The Third Jesus" at this link:
http://www.randomhouse.com/crown/thirdjesus/index.html?&ref=banner&name=deepakNYT

I thought that Tony Campolo summed it up well in the article that you linked to Bill:

“Young people have a broader agenda and are interested in poverty and environmental issues. Gay marriage and abortion are at the bottom of the list. They are conservative on them but they have have gay friends and don't want to start a crusade against them.”

I think that this is why Obama is attracting so many younger voters. Young religious types see through the rhetoric of the religious leaders that their parents have followed. We older types would do well to follow their lead.. but maybe not this November.

One Way for the Pope and All religious leaders, to join together, is to encourage members to resist supporting War for their individual countries, against our Brothers/Sisters of Life.

It is Time to Stand Up, Stand Up for Jesus, or their God, and Stop the Nuclear War that is immenent, with all the Nuclear Bombs, planted by many countries with all kinds of religions.

Bill's Saturday column mentioned Micah and his message of beating their swords into plowshares. That is needed today.

I do not hear religious leaders telling their believers, to lay down their weapons, and Stop Killing for their country. What does it mean for believers, to Stand Up For Their God.

So now look what we have, our Home Planet wired for Total Destruction.

All countries weapons of massive destruction, are using up our resoruces, and we are running out of areas to grow the food needed for the almost 7 billion people.

Should Humans be in the Hate/Killing Business or Love/Caring Business. What does it mean, I must be about my Father's Business? Caretaking of Life or Killing Life?

Are Humans, in the Hate Business, about the make their Home, the Planet of the Dead?

Life as We Know it 'is' for the Living, not the Dead.

I just read the short review of
The Third Jesus, by Chopra, and that is the Jesus that I write about also. Love of our Brothers/Sisters and Sharing All of the Earth's Resources Equally was Jesus' message, and is still the message.

He also taught Celibacy, but that also is not accepted. If the male practiced that, we could control the population, and we do Know how to reproduce a fetus,without the sex act, when we would need more Humans. But we should take Care of the Humans we have first.

But I guess it is better, to blow up our Planet. Killing has been the Way, to try to Control the Population, and now the Population is out of bounds for our land area. So blowing up our Planet is the Only Way, unless Humans want to Unite in the male celibacy, and in Sharing the Resources Equally.

It is wonderful to see a movement based on idealism in politics, one that is aimed at caring for those who having trouble taking care of themselves, whether it is because of poverty, physical illness, mental illness, or just bad luck. A movement aimed at helping the impoverished would seem hard to start in a country that values self-determination so much. When self-determination is so strong people start to believe that they have earned the good that comes their way instead of thanking God for their talents, opportunities and good fortunes. Such an error makes it harder to offer a helping hand to those who haven't done well.

Idealism is usually the realm of an inspired younger generation, because the older generations know too many reasons why idealism can't work, or else they've had their dreams knocked out of them. The young that don't know better may just turn an idealistic dream into reality. It's hard for an old person to be "silly" enough to believe that you can change a powerful nation just by refusing to go to the back of a bus.

Patricia, Thanks for your link to the Chopra book excerpt. I'm finding it fascinating. It suggests a way of viewing Jesus that could bring unity between Christianity and other mystical beliefs.

Can we change a Powerful Nation to Humanity and Equality and Idealism, for All Citizens, by refusing to go to the back of the bus, or, by refusing to Kill our Brothers/Sisters of LIFE? What does Idealism Equality mean? Heaven on Earth?

Can we change our current Knowledge of High Tech Colonization of a Planet, and Reproduction in the lab of a Human Fetus, to coincide with our Religious Knowledge of Creation and Perfect Humans in Genesis? Does Genesis record the Genetic start of Life on Earth?

Is the Human Race, the Highest Caretaker Species, of Life, or the Killer Species? We have cemeteries all over the Earth, to prove we are the Planet of the Dead. Do Humans even Care that our Home is covered with Pollution and Nuclear Bombs?

The Original Designer of Life as we Know it, is not a He or She. No One in Religion or High Tech Science, can describe this Source of Life.

Religion and Evolution have this Original Designer as the Source of the Atom and Electro-Magnetic Force type of Life on Earth.

Now it is Time to translate Genesis with High Tech Science Knowledge, to Know the Truth about our High Tech Ancestors. We may never Know the Original Designer of Life.

The Humans that wrote Scriptures and Myth did not have the High Tech Science Knowledge, and it was called super'natural' mysteries of a 'He'/'She' God. Our Human Ancestors!

You're welcome, Joe Barone. I agree that it is interesting reading.

Tony Blair's choice of college teaching assignments is, indeed, interesting. However, he has long been accused of breaking with British tradition by putting religion at center with politics. His recent conversion to Catholicism would seem to confirm the fact that he actually kept his faith at a lower key than its true importance, during his PM years. I can't wait to actually see his course syllabus. It should reveal a lot.

Today Bill Moyers' Journal did a segment on American religion and politics. You can view the video on his website. John McCain's involvement with Christians United for Israel: http://www.pbs.org/moyers/journal/03072008/profile.html