YES, THE POPE COMING TO AMERICA IS CATHOLIC

Peter Steinfels, who used to cover religion regularly for the New York Times and now writes a religion column for the paper, has produced this good commentary about the pope's upcoming visit and the silliness you might expect from some segments of the media. Steinfels, now co-director of the Fordham University Center on Religion and Culture, is right, I think, to suggest that all of us should not think we know ahead of time what Benedict XVI will say and do and think. Nor should the media pretend to be shocked by information about the church that's been true for decades.

WHAT ROLE FOR RELIGIOUS POETRY?

I'm going to use today's 377th anniversary of the death of the poet John Donne (depicted here) to talk a bit about religious poetry and to ask what role, if any, it plays today. 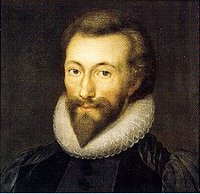 Donne, as you may know, was born into an English Catholic family in 1572, when anti-Catholic sentiment ran high there. He eventually became a poet with both romantic and profoundly religious sensibilities, and was able to give poetic voice to various theological ideas, including the ultimate weakness of death ("Death be not proud" from Holy Sonnet X) and the importance of the idea that God built us for relationship ("No man is an island, entire of itself" from Meditation XVII).

Metaphysical poetry before and after Donne has played an important role. Among 20th century poets influenced by him were W.H. Auden, T.S. Eliot and William Butler Yeats. Eliot, as you may know, was a Missouri native who eventually made England his home and eventually became a Roman Catholic. Among my favorite Eliot poems is one about part of the Christmas story, "The Journey of the Magi."

Do you read religious or metaphysical poetry today beyond the lyrics of hymns or praise music? If so, who qualifies as a religious poet today (besides Bob Dylan) in your view? And what difference does religious poetry make? I'm told, by the way, that the most popular poet in America today is Rumi, a favorite among people who follow the mystic, or Sufi, tradition of Islam.

To end today, I'll share with you one in the series of poems I've written about people I have known who have died of AIDS:

The corrugated rattle of death --

of life slipping away

I heard first in your throat.

You wanted to be

when you could talk

above a pained whisper.

But time's rules are hard,

and when your noise stopped

you were gone and still.

Gone and, I hoped, singing.

I hadn't thought of John Donne in a long time. I always preferred his love poetry to his religious poetry. Going to your link caused me to think about how such a prolific writer can be reduced in many people's eyes to, "do not ask for whom the bell tolls." Maybe finally, despite our best efforts, we all become stereotypes in other people's eyes.

In a sense, Eliot is right. For those who come into contact with him, Jesus changes everything and nothing.

Thank you for sharing your poetry, Bill. It is quite an honor to your friend, Hal. I'm sure he would be pleased at being thus immortalized.

Your link to Rumi is at one of my favorite sites for inspirational poetry, "The Poet Seers", maintained by the students of Sri Chinmoy. It's specially nice because there are very multi-cultural/multi-religious offerings, like this short poem by the Buddhist monk, Thich Nhat Hahn.

Be A Bud
Be a bud sitting quietly on the hedge.
Be a smile, one part of wondrous existence.
Stand here. There is no need to depart.

At another good source for inspirational poetry, The Nimble Spirit Review, you can find work by Lucy Shaw.
http://www.nimblespirit.com/html/poems_by_luci_shaw.html

Belief.net maintains a poetry forum and I also like to scan work by budding, but mostly unknown wordsmiths. http://community.beliefnet.com/forums/forumdisplay.php?f=58

I was given the start of all this High Tech science Knowledge, on Feb, 23, 1971, with the understanding of the Planetary Flood of the Noah/Atlantis High Tech Society.

I do not remember when I ran into Eliot's poem about exploring, probably about the time I accepted Earth was Colonized, recorded in Genesis 1.

The poem has been a help and comfort to me. I use it on my web site.

Poem.
"We shall not cease from exploration
And the end of all our exploring
Will be to arrive where we started
And know the place for the first time"

When no one else accepts that our Planet was Colonized by Pure-bred Asexual Humans from another Planet, I feel Eliot would have accepted this, from his poem.

We will know the beginning place for the first time, in the third and fourth generations, of our High Tech Science Knowledge.

All the books that have Gods from outerspace, can fill in the Christian Bible, which has parts of many of the old religions. Genesis has the outline for High Tech Science Colonization.

I have not been given any information about the Human Spirit/Ghost Life after Death teachings, on Earth.

I do accept there is High Tech Science, Asexual Human Eternal Life for Living Humans.

NoThing is more Important to Human Physical Life, than Balanced Elements on Planets and in Spaceships.

I almost always learn something by reading this blog. Bill and Patricia, thanks for the poetry links. I've put that Poem of the Day thing from the Seers site on my RSS feeds.

Another inspiration for me, beside T.S. Eliot.

A Book was referred to me, when I told my neighbor, a member of my church, about three days after my experience of the Noah/Atlantis Flood. The Book was in our Church Library.

I checked it out, and it was very helpful for me to understand the Planetary Flood. I have a paperback copy.

"The Flood" In The Light Of The Bible, Geology, and Archaeology. By Alfred M. Rehwinkel, M.A., B.D., LL.D. Professor of Theology, Concordia Seminary Saint Louis, Mo

Introduction. - "At a meeting of the British Association of Scientists held in 1865 a manifesto was drawn up and signed by 617 men of science, many of whom were of the highest eminence, in which they declared their belief not only in the truth and authenticity of the Holy Scriptures, but also in the harmony of Scripture with natural science. A copy of this manifesto was deposited in the Bodleian Library of Oxford."

Last sentence: "Rather leave the two side by side (Book of Nature and God's Word) until they may be reconciled; and instead of insisting upon the seeming differences between Science and the Scriptures, it would be as well to rest in faith upon the points to which they agree."

As I advanced to each new step of understanding, there was usually some one, recommending a book to me, and my librarian was very helpful on recommending books.

Just as the people on Bill's blog, rounded out more new ways for me, to express the Christian Bible with High Tech Science Knowledge with their remarks, so it happened to me from the start.

For me, it is a Fantastic Bliss Experience.

Tomorrow night, April 1, Barbara Walters is having a special at 9 PM on channel 9, in K.C, Mo time.

It is about the High Tech Science Knowledge of cell reprodcution, of Body Parts and all types of High Tech Science regeneration to your body. We already have hip and eye work and many others, that she covers in this special.

This is what I talk about, for how to have High Tech Science Eternal Physical Life After Birth.

This special is still about pleasure sex, but it should be very interesting.

You're welcome, Joe Barone. Thank you for your kind words and acknowledgment.

Religious poetry has been important since and before the time of Jesus in shaping the Bible. Many have proposed that Paul was quoting an early hymn in Philippians 2:6-11, even though there is no general agreement. No matter, this is music to my soul:

- Let this mind be in you, which was also in Christ Jesus:
- Who, being in the form of God, thought it not robbery to be equal with God:
- But made himself of no reputation, and took upon him the form of a servant, and was made in the likeness of men:
- And being found in fashion as a man, he humbled himself, and became obedient unto death, even the death of the cross.
- Wherefore God also hath highly exalted him, and given him a name which is above every name:
- That at the name of Jesus every knee should bow, of things in heaven, and things in earth, and things under the earth;
- And that every tongue should confess that Jesus Christ is Lord, to the glory of God the Father."

Just before in Philippians is also great music for soul teaching us how to respect Jesus:

Therefore if there is any consolation in Christ, if any comfort of love, if any fellowship of the Spirit, if any affection and mercy, fulfill my joy by being like-minded, having the same love, being of one accord, of one mind. Let nothing be done through selfish ambition or conceit, but in lowliness of mind let each esteem others better than himself. Let each of you look out not only for his own interests, but also for the interests of others.