WOULD GOD EVER DAMN AMERICA?

That's the topical question columnist Robert Scheer asks in this piece. Poor God. The Almighty gets drafted into one army after another, gets enlisted on behalf of this or that political party, this or that football team, this or that social cause, this or that religion. Still, at least it must be nice to be wanted.

THE MEDIA'S 'PROMOTION' OF ATHEISM

I'm always a little wary of media watchdog groups that have as their purpose exposing "liberal bias" or "anti-religious bias" or any other kind of bias in the media. 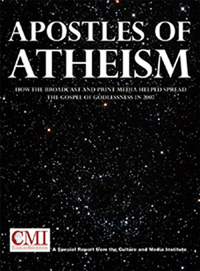 These groups tend to have their own biases and agendas. Still, they sometimes issue interesting studies and make all of us think.

An example is a new report from the Culture and Media Institute of the Media Research Center. The report, called "Apostles of Atheism," describes the group's effort to monitor coverage of atheism in various media forms.

The conclusion: Atheism gets promoted in the media in ways traditional religions don't. The first link I've given you in the first sentence of the previous paragraph will provide a secondary link to the full report. Or you can just click here to read that full report.

I'm not here to defend the media's coverage of religion or atheism. As regular readers of this blog know, I think the media generally do an inadequate job covering religion. The problem is many faceted. Newspapers and other media outlets don't devote enough resources to this coverage. Readers and views don't demand better. And there's lots of theological ingorance among media executives.

But I think there may be another aspect to the considerable coverage that atheism got last year besides any alleged pro-atheist bias in the media. And that has to do with the definition of news. News is what is out of the ordinary. So war and crime will always be news as long as war and crime are not the normal states of the human condition but, rather, aberrations (I know, that's getting debatable).

So when several books promoting atheism come along and start to sell well, that's a story, given that the normal state of affairs in the book world is that the Bible outsells everything. The new public attention to atheism is interesting, different, unusual. So it attracts media attention for those reasons, not necessarily because the media wants everybody to chuck religion and become atheists.

Well, read the study today if you like. And tell us what you think.

P.S.: The annual AIDS Walk in Kansas City to raise funds for local AIDS service organizations now is less than a month away. I'll be walking in it. If you'd like to help, click on the "AIDS Walk 2008" link under the "Check this out" headline on the right side of this page and make a pledge. Lots of needy people will be grateful to you.

Would God ever damn America? I guess it depends on whether you believe we are a chosen nation, a "city on a hill" as John Winthrop said. I don't believe that, so I don't think God would deal with the US in the same way God deals with Israel in the Old Testament. That being said, sin has its consequences, and sometimes those consequences are worked out hundreds or thousands of years later (i.e. the Crusades, US slavery and the way we are still struggling with racism).

It's nice to see Scheer or SOMEBODY bring up the fact that white ministers embraced by Republican politicians are guilty of hate speech. Which, in my opinion, is what it amounts to by asking God to damn anybody or anything. For any reason.

Sorry. But the new report from the Culture and Media Institute does not pass the sniff-test for UN-bias.

In order to legitimately make the accusation that atheism gets a pass by all those "liberal mainstreamers"(the full report actually insinuates that 91% of journalists may be atheists because they believe that people can be ethical without believing in God), you need at least one atheist and one religious bean-counter to quite literally count the negative/positive references to both atheism and religion.

I, personally, think that the cries by conservatives and religious people that they are victims of mainstream liberal press is hogwash. It is nothing more than an excuse to produce nasty propaganda programs on AM radio. Or CBN and CBN-like "news reporting" that make no attempt to separate objectivity/hard news from commentary.

Incidentally. Is this a RELIGIOUS blog maintained by a mainstream paper? To accompany the RELIGION section?

In a world where Christian-oriented people like Pat Buchanan and Bill Bennett are paid commentators on major networks, it's hard for me to see how atheism is favored in the media.

Real damnation is obliteration, bringing to ruin or destruction. Has this happened to nations, and is it always God? Yes it has happened, and sometimes we know it is God. God has brought destruction in the past when a nation's sins are so egregious that they require action in order to stop depravity from spreading like cancer. The story of Noah is a particularly striking example of how far it can go, where virtually everything was consumed by cancerous depravity. Sodom was an another example of cancerous depravity that God could not save.

We are not qualified to judge that a nation or a person should suffer damnation at the hands of God. Calling for such damnation is wrong; we are not qualified. Wishing ill will on someone is sinful. You know the venom when you hear it or read it, and it incites vengeance and/or hatred, both of which are forbidden by God. It is okay to want a certain harmful behavior to stop, but it should never be laced with the personal poison of wishing vengeance, hatred or God's damnation on someone. Those who have wishes of vengeance, hatred or God's damnation on someone risk being no better than those that they condemn.

That is why a legal system is good: it can carry out punishment designed to stop wrong behavior, punishment that is not dictated by vengeance, hatred or God's damnation. Vigilantism is wrong.

Who or what is GOD?

Some Religions teach God is a Spirit 'Being'. What is that? How can a Human Being, or a Spirit 'Being', make the Atom and Electro-magnetic Force that the Human and Spirit are made from?

How can a Human being, or a Spirit 'Being', make the Earth, our Sun, the Solar Systems, the Galaxies, and the Universes.

We again have the High Tech Knowledge today, of Colonization and Reproduction. Can we still accept the teachings of Fallen Human writers and translators, that record GOD as a Human Being, or a Spirit 'Being'?

Is it Past Time, for a Way to Unite Fallen Humans, under the One GOD that made the Universes, and Life as we Know it?

Our Human Ancestors Colonized Life on Earth, and are called the Creator God, the One God, and the Triune Gods, and Multiple Gods. None of these are GOD, the Source Of LIFE. No Human has ever seen this GOD. The Gods of Earth were seen by many Humans.

The Prophecy of the Last Days 'Arm'ageddon War, is set up on Earth, with nuclear bombs on land and sex. Unless Humans Unite, there will only a few Human 'Beings' left on our Home Planet, for the Final Judgement Day.

So which GOD/God are people damning today? The Creator of LIFE, Unknown, or our High Tech Human Ancestors, that will return to Earth for the Judgement Day? How will we Know them, as they descend down out of Heaven? As Aliens and Enemies?

Vengence is mine, 'said' the Lord. Which Lord was that? The One that walked and talked to Humans, face to face. Or, the One GOD that made the Elements that make Life, that no one has ever seen?

Why would the GOD that made the Atom and Electro-Magnetic Force, into Life as we know it, want to Kill it? When GODs Elements get out of Balance, by Humans, they Kill, but GOD does not Kill. GOD Creates.

Humans made the Gods on Earth, from memories of our High Tech Human Ancestors, not GOD. Our Ancestors made Perfect Humans, not by Body Birth, to be the Caretakers of all this Life.

The Atlantis Myth, was written, as a memory of something that happened on Earth? Atlantis, and the Noah Flood, were memories of the Sinking, of the Land Mass of Earth.

Did GOD cause this or Humans? Who can say today, the Noah writings, are more real, than Atlantis' High Tech Science writings? We have High Tech Science today to understand all the supernatural writings of our Past.

Until we settle whether GOD, or, Our Brothers/Sisters of Life, are to take Care of Planet Earth, and the Life on it, we will continue Killing each other.

Our Planet cannot support, this Overload of Humans, made by Body Birth. Hate, Killing, Polluting, and a coming Nuclear War resulted.

The Elements GOD made, will die, and return to GOD. Then Life on Earth cannot continue.

So Who and What is GOD, and God, Goddesses, Angels, Spirits, Human Ancestors, etc., on Planet Earth?

Which one, will Save us from our Living and Dying Learning Lessons? GOD or our Ancestors?