A SAUDI CALL FOR DIALOGUE

Some good news from Saudi Arabia: King Abdullah wants to invite representatives of the three Abrahamic faiths to a conference to talk about common ground and "ways to defend humanity." And the call has been picked up by the Saudi foreign minister. It may be hard to believe, but Abdullah, whom I met in 2002 when I was with a group of journalists who traveled to the Saudi kingdom, is in some ways a reformer. Yes, his House of Saud has run an oppressive regime since his father became the country's first king in the 1930s. But Abdullah, unlike some others in his large, rich family, seems to sense the need for some political, economic and maybe even religious reform. Whether this small interfaith dialogue gesture will turn into anything useful is uncertain, but it's clearly a slap in the face to radical Muslims (remember than 15 of the 19 9/11 hijackers were Saudis) who view Christians and Jews as evil infidels. But if it turns into Wahhabi leaders lecturing Christians and Jews, it will fail.

Many regular readers of this blog know I've been working with a local rabbi on a book about Jews in Poland who survived the Holocaust, or Shoah, with non-Jewish help. For more information about that project, click on the "Holocaust book project" link under the "Check this out" headline on the right side of this page. 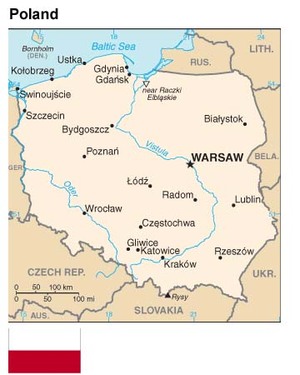 The work took me and Rabbi Jacques Cukierkorn to Poland last August to do a series of interviews, mostly with members of families who helped to save Jews. There weren't many Polish non-Jews who did this. In fact, more than 90 percent of Poland's nearly 3.5 million Jews perished in the Holocaust.

But while we were there we got at least some sense of the reality that a Jewish presence is returning to Poland today. The estimates for the size of the Jewish community there vary, but most guesses put the number of people who would identify themselves today as Jews in Poland at a few thousand -- between 5,000 and 30,000, say.

There is evidence of interest in Jewish life, for sure. There are Jewish restaurants and Jewish festivals, but most of this is created by non-Jews for non-Jews.

But Hadassah Magazine has done a good update on how the re-emergence of Jewish life in Poland is going this days. And it's worth a read, even if you have little interest in Poland or Judaism because it offers a sense of how new life is possible even in the aftermath of the most horrific history imaginable.

One of the leaders of the Reform community in Poland told us that he really needs at least half a dozen more rabbis to locate in Polish urban centers so that everyone with an interest in Judaism can have the chance to explore what that life might mean. But so far it's difficult to get such people to come to Poland and there's not much of an educational system yet designed to produce rabbis.

By the way, one of the people mentioned in the Hadassah piece will be featured in our book, the Rev. Romuald Jakub Weksler-Waszkinel, born a Jew, but reared by a Catholic family and now a Catholic priest and teacher. We interviewed him in Lublin.

It's good that people want interfaith dialogue. Yes, there are common values. Everyone is concerned with the loss of family values in the Western world, as Ariel said. How do we deal with the licentiousness of secular society that is undermining the family institution (Ariel's words)?

There are unique challenges that free countries face, because of personal freedom. How should these be balanced? Should countries impose morality when freedom is out of control? God knows this problem well. God wants us to choose Him, but that means leaving room for us to go our own way. What a quandary for God. God values freedom, but He has denied that freedom and blotted out life when the damage of sin can be no longer contained.

God could simply blot out our life at the first point of sin. But it seems that freedom to choose God must include a certain amount of freedom to choose against Him, something which He tolerates for a season provided that it is contained. This leaves no human with the moral authority to damn another for their mistakes in an unprovoked attack such as a 9/11 attack or by terrorism.

Freedom is an issue that should be on the table in religious discussions, too. God values freedom, but it can go too far.

Ever since Earth had Life as we know it, and a Human Brother killed a Human Brother, we have lost sight that All Humans are related, by Body Birth, to the Original Perfect Humans on Earth.

'In the beginning' of Life as we Know it, the Human Species were to be the Caretakers of All Life and our Eco System on our Home Planet.

Since then Humans have divided by Body Birth into race, creed, and government groups. Today we have 6.6 billion divided Human Brothers/Sisters of LIFE.

It will take more than a few Humans, in a meeting, to solve the Divisions of Fallen Humans.

We now need a Planetary Knowledge Reason, for all these Divisions, before our Hate of our Brothers/Sisters of Life, blows up our Earth Home with our Nuclear Bombs.

For What? Love of God?

So Do Humans continue our disagreements about race, religion and government, or, Join Together as One Human Species, on One Planet, and have Killing and War no more.

It is Time to beat our weapons into plow shares, and feed and clothe all Humans. The Human Species was put in Charge, not God, to Take Care of All Life, and our Eco System.

This was said to the Original Human Colony. Were and When did Humans Fall to the Wrong Killing Lifestyle?

Until we solve this, Humans will continue on the Killing Path of Destruction of All Life on Earth.

Thou Shalt Not Kill, and Turn the other Cheek, are not what Fallen Religious Humans follow.

In the interfaith dialogues I have been involved in, both formal and informal, I have not had good experiences with Muslims. To be honest, only one time did I ever face a hostile Muslim. Most often, the Muslims stuck with their basic tenets: Muhammad as God's final prophet and the Quran as the definitive word of God. Since those of different faiths tended to disagree with these presuppositions, dialogue did not go far. Sometimes the conversations got to the point of, "Well, we all believe in the same God, so we can see you as basically Muslim." I'm not sure if this helped or hurt the discussion.

With Jews I've had a lot more fruitful discussion. I'm not sure why, but those discussions were more easily able to find common ground. Christians can talk a long time about God without mentioning the Trinity, or at least being aware of where that appears to contrast with certain points of the Old Testament.

Since Jews and Christians have large amounts of the same Scripture, one can spend a lot of time going through texts, which leaves some of the doctrinal points to the side.

But, RichB, do we really "believe in the same God?" Yes, Muslim, Jew, and Christian all have something of a common starting point. But if you ask each religion to describe God, you will very likely get some different, and contradictory, descriptions. The law of noncontradiction should tell us that those are not the same gods.

I'm not sure that I understand what overarching agenda was set at the meetings that you attended, RichB. To identify some basic beliefs or tenets that all could accept? What did you want from the Muslims?

My idea of the best interfaith meetings would follow my idea of a great faculty meeting between modernists and deconstructionists. Or maybe like the Easter dinner that I just threw, where the atheist/Democrat and fundamentalist/Republican family members were going to have to co-exist for a space of six hours.

Begin with an overriding agenda or goal that is simple. "We will all leave this dinner without a dead person at worst and with a better understanding of one another and tighter family bonds at best."

Create small, intimate working groups, with rotating leadership, that must identify and solve problems. Atheists and fundies devise and implement system for younger children to find as many eggs as older or a way to make the au gratin potatoes without the cheese that I forgot to buy.

Arab/Jewish/Christian group devise ways to care for Jewish and Christian survivors of terrorism and devise ways to improve the lives of hopeless, unemployed, and angry Palestinian youths.

Sometimes the best that can be expected of interfaith doctrinal or belief differences is simply to recognize that they exist and respect that. The key to interfaith RELATIONSHIPS is to identify and work toward common, preferably humanitarian, goals.