AND IT DOESN'T MENTION GANDHI, EITHER

The other day, the leader of Libya, Col. Gaddafi (why has he never risen above the rank of colonel?), suggested the Bible was forged because it didn't mention the Prophet Muhammad. Now Christian leaders in Uganda are suggesting he be forgiven for such anachronistic stupidity. Ah, if only everyone were so charitable.

THE WORLD BARGES IN

This past Good Friday evening, I was sitting with my wife and some friends in the sanctuary of Community Christian Church of Kansas City, which is near Main and 47th (or Cleaver II Boulevard) streets on the east edge of the Country Club Plaza shopping district. (The photo here shows the front of the sanctuary there.) 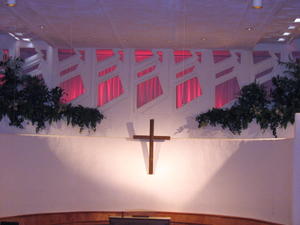 We were about to hear a presentation of Franz Joseph Haydn's "The Seven Last Words of Christ," an event at which I have been a speaker in the past.

There was a low murmur from the crowd as we waited for the music and meditations to begin. But over that sound I suddenly became aware of loud muffler noise from a large truck moving down the Main Street hill outside.

And I was struck again by the sometimes-difficult truth that religion that focuses so completely on interior things, on personal needs, on inward spirituality and has nothing to say to the truck drivers going by is, in the end, pretty useless.

Twice later in the midst of this lovely event I heard sirens outside -- police, perhaps, or an ambulance or fire truck, screaming toward some emergency somewhere that had put someone or someones in jeopardy.

Maybe what Gaddafi needs is a wrinkle in time. That would bring it all together.

I attended a church once that was on a fairly major highway through the community. Once in a while, the wireless speaker system would pick up truckers blasting away on their CB's. That's not a bad way to be reminded of the outside world.

The Ugandan Church leader seems to be as wise as he is charitable, because he has moved to diffuse an event that might provide fodder for civil unrest between the Muslim and Christian community. What this article does not note, is that other Christian leaders had responded by noting that Gaddafi's remark was typical of Islam, "an intolerant religion". Still others accused the Muslims of owning the "pork joints" in Uganda. http://allafrica.com/stories/200803240012.html

Ghaddafi's argument about Muhammad in the Bible is an old one. I first heard the argument over 10 years ago, and I haven't been around that long. It is a common Muslim argument against Christianity to say that the religion has become corrupt because of copying and translating the Bible. Corruption of Christianity required it to be perfected by Islam.

We're actually pretty lucky that we live in times that provide emergency vehicles with sirens. Only a short time ago, I listened to a man recount his experience, as a boy, of running around the neighborhood, trying to find help when his father was in the throes of a heart attack. The phones were out and it was "pre-mobile". The father died.

In lieu of running down the street after the sirens, a prayer is probably always a good bet.

You can either listen to or download all of Hadyn's "The 7 Last Words of Christ" here: http://www.emusic.com/album/Le-Concert-Des-Nations-Jordi-Savall-Haydn-The-7-Last-Words-Of-Christ-On-The-Cross-MP3-Download/11079383.html

In Bill's referral. President Yoweri Museveni Yoweri said, "I do not believe in competition between religions (Muslim and Christian). After all, God has no religion. God is for us all."

With All the different Gods on Planet Earth, can there be any One Accepted Understanding about Life? Not a Religion? Does God Worship, Unite or Divide Fallen Humans?

We have Evolution added to the religious mix, the past 100+ years. How has this affected Religions?

Do religious writings and myths portray, Gods, Angels, in Human form, that came to Earth from Space, and made Perfect Humans in their Image? How does this affect Religions today?

When was God changed from Humans, to Spirits? Spirits do not walk and talk on Earth. Did Jesus prove God is a Human, when he went out into Space, with the Father of Life on Earth?

Have Humans evolved, up to the High Tech Knowledge of travel in Space, to Colonize Planets? To reproduce Human fetus', and, Cloning in the High Tech Lab, without the sex act?

'In the Beginning', was this High Tech Science Knowledge? Do our Scriptures and Myths support, High Tech Colonization and Reproduction? Or, Evolution?

Evolution on a Planet, could be possible somewhere in Space, up to a High Tech Science Society of Pure-bred Humans. It did, They did Colonize Earth; Humans were made in their Human Image. Life on Earth did not Evolve.

The many writings from our Past, translated with High Tech Science, can prove the 'Literal Truth' of Eternal Physical High Tech Science Human Life, After Birth, on Planets and in Spaceships.

One key in avoiding conflict is to reach people with love and instruct them in the ways of love so they not carry out damnation on others in the name of God or Allah. Those trained in love will try to erase from their mind even the smallest bad wish that they may have for someone else ... before it takes root.

It is okay to wish or pray for something to be different, but that should never involve or entertain the smallest wish of ill will. Even a small bad wish is a sin of hatred; hatred is the seed of murder and it drives God away. This must be understood in order for someone to reach emotional and intellectual maturity in love.

I heard once a wondeful story of two professors who used to tease each other in a faked arrogance about how they were better than the other.

One of the professors learned that the other was writing a textbook in their subject and he insisted that the other would have to cite him in the book because there was no way to avoid the mention of his great name in any textbook on the subject.

In the preface of the text, the author did mention that he had to mention his friend in the book, and the author directed the reader to the index to search for his friend's name. People were of course intrigued. So they would go to the index, find the name of the author's friend and flip backwards, only to find themselves right back at the page where name was located in the index.

Friends can have fun even in the most serious topics if there is no ill will.