THE FUTURE OF RADICAL ISLAM

As we have just marked the fifth anniversary of the war in Iraq, it seems appropriate to ponder the strength of radical Islam. This commentary from The New York Times does just that -- and with pretty clear eyes, I think. I'm not quite as pessimistic as this writer, but close.

I mentioned here recently that if you want to follow preparations for Pope Benedict XVI's April visit to the United States, the U.S. Conference of Catholic Bishops is offering this Web site. 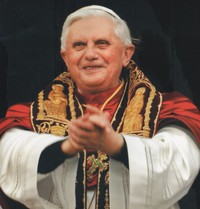 But because a papal visit is both rare and potentially important for many reasons, I thought you also might enjoy this preparation piece about the trip by the best Vatican analyst around, John L. Allen Jr. of the National Catholic Reporter.

John calls it a one-stop guide to the trip, and, indeed, it is long and comprehensive. When you combine it with the bishops' site, I think you'll pretty much be up to speed on what you need to know.

Because I'm not Catholic, some of the pope's trip will interest me only for journalistic reasons, not for reasons that might apply to adherents. But other parts of the trip should engage all of us, especially the pope's address to the United Nations.

There, as John Allen notes, he'll be speaking to the entire world, and in some sense his job, given the bully pulpit he'll have, will be to represent all people of faith and to speak a clear and forceful word on behalf of faith and the universal values the great religions share.

Given this pope's occasional tone-deafness about how his words will be perceived by others outside the church, I hope someone with international sensitivities is vetting his speech so later he doesn't have to give either an apology or a "what I really meant was" response.

Can the Pope make a Peace recommendation, to the United Nations Organization in New York? None of our religions are ready to Unite under One God? How can our Divided Governments Unite?

With all the different countries around the World, how are we going to Unite in One Government for All? Or do we have to wait for Jesus? Will he return before or after the Abomination of Desolation, with our Nuclear Bombs?

All down through the History of Earth, Brothers/Sisters have been Killing Each Other, the animals, birds, fish, etc., and their Living Eco System.

Many countries are making Nuclear Bombs, and the are placed on land and sea. The USA has many military basis all over the Earth. For What? Peace or Military Domination?

Are Nuclear Bombs the Abomination of Desolation of our Home Planet? This term is used in many places listed on Widipedia. In Daniel 11:31, and Matthew 24:15, these are the words used.

So if we accept that Jesus is the Prince of Peace, and he will return to set up a Peace Society, we also teach the ones saved Alive, after the Desolation, will go with Jesus to a new Mansion/Planet.

So if prophecy is correct, will there ever be Peace on Earth? Do Human even Care, or even Want to Unite in Peace, before the Nuclear War?

Nothing is beyond the Human Perception of Self Protection, against their Brothers/Sisters of Life, even to making Nuclear Bombs.

Why are our Brothers/Sisters our Enemy? What made Humans live such a Horrible Killing Lifestyle. Sin?

Should we try to find out the Why of Sin? Disobedience to God does not explain Why Humans Kill?

It should not be a shock that radical movements flourish in times of hatred and war. Hatred can be a most primitive motivator of those who are intellectually and emotionally immature. It's so much easier to rile people who have not yet gained control over their emotions, and very often such people lack friends and other support because of their troubled nature. These are t
he people that violent, hate-filled movements seek and befriend.

Societies and normal Churches need to do a better job of loving the unlovable and disenfranchised instead of leaving them as prey for the wolves that befriend and use such people to track down and kill publicists of objectionable cartoons or who volunteer for suicide missions. Everyone deserves to loved and cared for; those who you don't like or who are instable need to mentored, not shunned. It is God's order to protect and love. We must not let the instable become cannon fodder for extremists.

The problem becomes bigger every day that extremists are able to recruit another undisciplined, instable, intellectually immature, emotionally immature, or reactionary person and manipulate them into a hateful instrument of their wrath. Love is so important; not everyone responds, but those who don't want to be lost will respond.

I find Berman's article to be a sort of......"Jeepers, after completely ignoring the Israel/Palestine issue FOR YEARS and completely screwing things up in Iraq, radical Islam is more powerful than ever. Whooda thunk?"

We not only gave extremists a (second) cause in Iraq, but once we found the sectarian fighting too much for our own governmental and military capabilities, we began to ally ourselves with and arm extremists(or at the very least, to leave the extremists alone). Extremism begets extremism.

It is the armed secularists and Sunni moderates that we are fighting in Iraq. It is the Shite religious radicals who are the fodder for terrorism, that we are supporting and arming and growing.

While you're feeling the love, Jean, you might spread a little around or demand more from Christians like John Hagee and others in this country, who vilify all Muslims and inflame the situation with their end-times philosophies that demand a return to Israel.

This article has a strong message about the power and nature of God: http://www.salon.com/mwt/feature/2008/03/22/ann_bauer/