A Catholic priest in Poland who is also a scientist has won the big Templeton Prize for this year. He's helped people to explore the religion-science connection, so good for him. And good for Krakow, his home, the beautiful city I visited last August to do interviews for the book project I'm working on (see the "Holocaust book project" link under the "Check this out" headline on the right side of this page).

A CLERGYMAN FACES HIS DEATH

Over the last several years I've gotten to know a Unitarian Universalist minister from New York who has written some really good books. He's Forrest Church (pictured here), and even before I met Forrest I had met, years ago, his father, former Sen. Frank Church of Idaho, who developed quite a reputation investigating abuses in the Central Intelligence Agency. 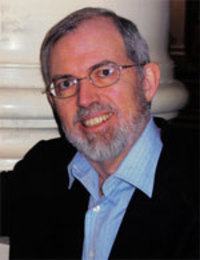 Forrest recently was required to preach a sermon to his congregation in which he told members that his cancer has returned and that he's dying. It's one of the best sermons on death (and love) I've ever read, and I wanted you to have a chance to read it, too. So click here.

One of the most striking parts of what Forrest had to say focused on the idea that a series of amazing events had to occur for us even to be here today, so the gift of life is precious in and of itself but even more so given what it took for us to be born at all. As he says in the sermon, when the cosmos was created, it already was pregnant with us.

As regular readers of this blog know, I often write about death here and in my column because I am convinced that we'll never understand our life if we don't understand our death.

Forrest's sermon helps us with the latter task. Marinate in it a little today.

Why did God only make Adam and Eve Perfect Bodies, and then let Satan take over on Earth, with Imperfect Bodies?

On a news show today, at closing, the Host said what have we learned this morning? They were talking about the election and the New York Governor that resigned from a sex scandal. One guest said, "I guess a wife stands beside her man, is like a woman wearing a burqa."

What did Satan have Adam and Eve do, to make Mis-bred Bodies by Body Birth, when they were Perfect, and not made by Body Birth by God? We do Know how to make a Human, without the sex act today.

We cannot continue using Satan's Nuclear Bombs to bring Good to our Planet. They are not a gift from God. How has God protected his Children, in the past from Satan and Death?

Is it Time to understand what is of God/Life and what is of Satan/Death? Or is all Life, good or bad from God? Who is Satan? The Human that talked to Adam and Eve?

Is God a Human like Jesus? Or are God and Satan, Spirits?

Every day is a gift that God has given us, and each one of those gifts seems so much more precious when there are not many left. But the worth of a day in a life is inconceivably valuable, regardless of the days that have passed or the days that are to come. Somehow we better understand the day's value more when we come to realize the urgency of sharing God's love with others so that others may find God and rest in His love. Each life and each day of that life has immeasurable worth, and it should not be squandered and consumed in trifling. So much is just an illusion and is not real, but we know that love is real.

As long as we Share Gods Love, with our Brothers/Sisters of Life, and then Hate them and go to War with them, the Hate shows how hyprocritical Humans are.

Why did we fight our Christian Brothers/Sisters in the Revolutionary War, for God? The Civil War? WW1 and WW2?

Do we need to adjust what we think is God's Way of Moral and Good? Is God's Way, Sharing the resources of Earth Equally, and Peace? Or does God favor some Children over Others? How did we get into such an Unequal mess today? Following God?

Why are Americans Hated around the Earth?
Because we have the most blessings, the most weapons of mass destruction, from God, to make them scared of us?

Does God give us more resources and weapons, than his other Children on Earth? Does that make us Big Bullies?

Or is this a Fallen Human trait, that has lost the Original Equal Sharing and Peace Rules of God?