THE BLAIR WHICH? PROJECT

Will Tony Blair convert to Catholicism? I don't know, but that's the reported speculation. And if he does, will that balance out King Henry VIII's rejection of Rome? Hmmm.

If you had to guess, how many Muslim FBI agents would you say there are? 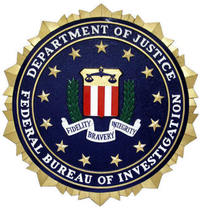 But as this recent report in the Arab News suggests, the Federal Bureau of Investigation would like to change that and, in the process, create better, more trusting relationships between the FBI and American Muslims.

One of the ways the agency is doing that is through humor. At a recent convention of Arab Americans, the FBI sponsored some stand-up comedy. (Just as an aside, when I was growing up, I thought J. Edgar Hoover was a stand-up comedian until the grown-ups around me assured me that he was deadly serious and meant to talk and act that way.)

Well, a little levity never hurts, but in the long run what will convince Muslims that the FBI can be trusted will be the agency's policies and behavior, including the way it treats everyone. The agency, when properly managed, can be an effective crime-fighting tool, and its agents should include people from all facets of American life.

So there's still lots of work left to do.

To read my latest Kansas City Star work, click here. (In my column tomorrow, I will be asking where the passion is in faith communities on issues of racial harmony and poverty.)

I don't remember seeing a lot of media stories about FBI agents mistreating Muslims. In fact, 9/11 may have been prevented if the FBI had not been so afraid of offending Muslims.

In K.C. Star today. Judge's Opinion.
Bush is in a tank with a General.
"Destroying Human Life in hopes of Saving Human Life is not ethical....
Right, General?"

Christians need the resources spent on War, to help the Living.
Why does a Country with a majority of Christians for 300 years, have the most nuclear weapons, and sell arms to countries all around the planet.
Is this Serving Jesus or God, or mouth worship?

Why do we kill any of our Brothers/Sisters of Life?
At least if we stopped killing the Christian ones, it would help to start bringing partial Peace to the world.

It is time to beat the swords into plow shares before we blow up our Home Planet.

The Blair Which? Project. Very witty, Bill. I despise the fact that Blair backed Bush on Iraq but do find the man likable and sincere. His devotion to his wife and family do make it probable that he'll convert.
---------
Thanks for the link to this BIZARRE story about the FBI and the Axis of Evil comedy group. Ten Muslims out of 12,000 shows how far behind the FBI has gotten. I've been reading about the major problems that derive from too few Arabic speakers and translators in government agencies.

I don't think that the FBI failed to protect America for fear of offending Muslims, Ron. They failed because of a stagnant bureaucracy, poor coordination, and antiquated computer systems. Not to mention a president and Condi who completely blew off the reports that a major event was in the works.

Blair actually saw the intelligence Bush was using to push the Iraqi war and he was dumb enough to believe it anyway. He ignored the irrational intentions of Bush in going after Saddam Hussein for 9/11. He has proven himself incapable of examining important issues in a logical and careful manner, and has proven his willingness to ignore criminal conspiracy. Add to that a useless belief in the power of incense, mystical incantation and undecaying dead bodies, and I'd say that he'd be the perfect, unquestioning, mindless automaton that the Vatican needs to carry on its rich tradition of criminal sexual abuse, silly hats, and Pope mobile road commandments.

"I've been reading about the major problems that derive from too few Arabic speakers and translators in government agencies."

I doubt there are very many American Muslims that speak Arabic.

"I don't think that the FBI failed to protect America for fear of offending Muslims, Ron."

Yes, they did. The fied agents' superiors in DC were scared to death of being accused of picking on some poor, foreign Muslims. Their fear led to inaction, which led to 9/11.

Here is some info on the number of Arabs in America, Ron. I'm guessing that a fair number of the 3.5 million people may speak the languages that are needed in government agencies. http://www.aaiusa.org/arab-americans/22/demographics

I've never heard your theory that the FBI was afraid of offending potential terrorists, Ron. Would you have a source to share?

Patricia, why do you think they ignored foreign Muslims whose Visa had long expired learning to fly, but not land, commerrical airliners? They could have been arrested and deported immediately, but weren't. Political correctness run amok. No one wanted to offend CAIR. I imgaine they were afraid that if they did, a bunch of CAIR Imans might stage a mock anti-Muslilm incident at an airport and claim to have been discriminated against...oh wait... they did that anyway.

It was pure incompetence run amok.

P.S. A bunch of Immans PRAYED at an airport. A bunch of ignorant bigots flipped out and turned it into an imaginary terrorist plot.

And we wonder why the Terrorist, Muslim extremist and various other America haters jumped for joy when the Democrats took over congress. This article is typical Liberal Democrat thought and the terrorist love every word of it.

"P.S. A bunch of Immans PRAYED at an airport. A bunch of ignorant bigots flipped out and turned it into an imaginary terrorist plot."

A bunch of Imans got together after their convention and went to the airport and intentionally acted weird and suspiciously in order to provoke a confrontation in an effort to make the public think Muslims were being picked on and discriminated against. They sat around the airport and prayed loudly in order to get everyone's attention; they got on the plane and starte switching seats and asking for lapbelt extendersk, anything they could think of to provoke an incident. Not very Iman-like is it...or maybe it is.

So true, Howard, so true.

Oh, PLEASE, Ron. Read your words and how absolutely paranoid they are. ONE Muslim moves to sit by and assist the blind Imman. They ask for seat extenders because they always do and because they're big men. Did you know that they had called the airline in advance to let them know there would be a group traveling, so the employees would not be alarmed???? They went off to the side to pray, so as NOT to disrupt.

An incident was "provoked" because of ignorance of Islam and the foreign and just good old bigotry an un-Christian responses.

"An incident was "provoked" because of ignorance of Islam and the foreign and just good old bigotry an un-Christian responses."

Wow, a plane full of Christian bigots. What are the odds of that? I imagine a lot of the folks on the plane were not Christian, or bigots, but they recognized a bunch of crazy Imans doing weird and crazy things intentionally, as it turns out, in order to provoke a response and sue for millions of dollars and scads of publicity for their cause of making Americans seem prejudiced. And, it worked. The crazy Imans from CAIR have filed their lawsuit and claimed a random group of Americans are all prejudiced against Muslims and a bunch of bigots. Patrica fell for it hook, line and sinker.

There wasn't a plane full of Christian bigots, Ron. There was a plane that had lots of people who were watchful and nervous after 9/11.

I read all the official airline and police reports (Did you?) and it looked to me like you had a few very noisy people who feared the immams and airline personnel who did not handle those people or the situation well. The immams didn't really do anything wrong, except to look foreign and to pray.

It was the talk radio propagandists and conservative blogs that exploded this story into some kind of plot. It played well on their hate filled airwaves and sites. There are always people, like yourself, who are willing to think the worst.

I say to the Immams, "Go lawsuit". It's a pity, though, that they can't sue people like you who keep the story going and continue to smear their good names, long after the furor should have died down.