WHAT IS GOD THINKING?

Paris Hilton, famous for being well known, says God has given her another chance. If so, it's a hopeful sign for all of humanity. Either that or God is the sort of pushover many rebellious teen-agers wish they had. What do you think?

Most of us who pay attention to international news have been hearing for several years about the re-emergence of antisemitism in Europe, where the history of this hatred is long and horrific, having culminated in the Shoah, or Holocaust. 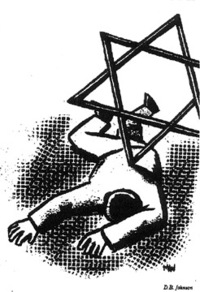 But now a new report is giving us a better sense of the scope of the problem. And antisemitism certainly isn't limited to Europe, this report makes clear. It also remains a problem in North America, though I have heard some Jewish leaders in the United States say that antisemitism is not part of the experience of most American Jews today.

The full report by a group called Human Rights First can be read by clicking here. I particularly call your attention to a section called "Antisemitism as public policy" and one called "Resurgent Antisemitism in Central and Eastern Europe."

As many of you know, I'm working with a rabbi on a book about Jews in Poland who survived the Holocaust with non-Jewish help, and one of the chapters will discuss the long history of anti-Judaism in Christian history, which helped to create modern antisemitism. It's a breathtaking and shameful history, and many American Christians today seem completely ignorant of it. And, by the way, if you want to know how you can help with this book project, e-mail me at wtammeus@kc.rr.com.

"Paris Hilton, famous for being well known, says God has given her another chance."

It never ceases to amaze me that God is capable of such grace. It never ceases to shame me that, having received more than my fair share of grace, I would dare to question when He shares that same grace with someone else, someone I deem unworthy. It's the Jonah syndrome, and I'm sure we all suffer from it to some degree or other.

I sincerely hope and pray that Paris Hilton has, in fact, been touched by God.

Couldn't have said it better, Sc in KC.

In 1900 we only had 1 billion people on Planet Earth. In 2000 we had over 6.5 billion. In 100 years we have had all kinds of waves of youth movements, in each generation, that seem to overwhelm us.

So, now we have the Paris Hilton generation and it is very broad. In Generation Body Birth we can see the changes from my parents born in the 1890, to my generation of the 1920, and each generation since. With the explosion of people, it is easier so see the similaritites of each generation that is in the seeds of humans that breed by Body Birth.

So we need to have compassion for the ones that have more mixed-up genetics that others. It is in all classes, not just the rich. And we can see the school killers that recently have appeared. It is all in the generic generations of the seeds that are joined by Body Birth. No one get to choose what seeds are used to make them.
So we need to get some understanding of the Civilization we have ended up with in the past 100 year population explosion.

Key to receiving God's grace and undergoing a change of heart, is seeking out and calling and sharing the happening with Barbara Walters.....the moment it happens......in time for the daily discussion on "The View".....so that there can be lots of articles written on it the next day........the day after the American disapproval rating of you in is the 90+% column..............

I suggest that this moment in Paris' life be approached a bit like the moment that your four-year-old tells you he is going to marry you when he grows up. Wait and see.

I agree with Patricia. It's mighty convenient for Paris Hilton to "find God" just before talking to Barbara Walters. Playing the "God card" isn't an automatic "get out of jail free" card.

On the other hand, I think it's ridiculous that Paris Hilton is even in jail. I'm not impressed with the judicial system tries to demonstrate its fairness by such antics. Another s example of the judicial system's attempts to impress all of us regular folk was putting Martha Stewart in jail. Do they think we will all believe justice is fair if they pull these kinds of stunts?

Of course, the ultimate example of the judicial system's stupidity is sentencing Scooter Libby in jail for not telling the truth about a crime that never occurred. In the courts' efforts to impress us with their fairness, they just prove how unfair the system really is.

Bill seems to use the words "anti-Judiasm" interchangeably with "anti-semiticism." I'm not sure this is correct, especially if people consider the Christian belief that faith in Jesus Christ alone is the only path to salvation to be "anti-Judiasm." I certainly believe the former, and don't consider myself to be the latter.

What's happening with Paris is very hopeful. But what is not hopeful is that the law would offer special advantage to her.

Our laws are nothing if they are not justly applied. Shame on people who bend laws to favor a celebrity or someone important.

Lev 19:15
Do not pervert justice; do not show partiality to the poor or favoritism to the great, but judge your neighbor fairly.

Deut 16:19-20
Do not pervert justice or show partiality. Do not accept a bribe, for a bribe blinds the eyes of the wise and twists the words of the righteous. Follow justice and justice alone, so that you may live and possess the land the LORD your God is giving you.

Bill makes a distinction, Ron. He clearly states that anti-Judaism has contributed to antisemitism. That implies the two terms are separate but that one can contribute to the other.

I don't see what's ridiculous about Paris being in jail. She drove under the influence. Which is serious. Then she broke the conditions of her probation.....TWICE. Judges don't like having defendants thumb their noses at the judicial system, no matter who they are. It's worse when they are the role model for lots of teens.

It appears the special prosecutor in the Valerie Plame affair may be put in jail himself for conducting a two year inquiry into a question he already knew the answer to, and thereby putting Scooter Libby in a position to "lie" about something that was no longer in question. Does anyone think 30 months in federal prison is fair for this "crime?" The minister's wife who shot her husband in the back with a shotgun while he slept got less jail time. It's just another example of the legal system twisting itself into a pretzel to try and fool us members of the unwashed masses into thinking the system really is fair.

Ron, past injustices do not excuse current or future ones. We have law that should be enforced. Anyone caught lying to a grand jury or to federal investigators should be jailed: that's justice. It's not justice for you to believe that the morons and thugs in the Bush Administration should escape criminal penalties when they lie to grand juries--they're big boys and they knew better than to lie.

You're like the little kid who thinks that just because your brother didn't get punished for doing something 3 years ago, then you should not be punished either. Such lame arguments show exactly why we should enforce the law for everyone--otherwise people get the idea that they do not have to obey the law any more. Apparently you do not think the Bush Administration officials should have to obey the law. Your subversive lawlessness is dangerous to society and to our Constitutional form of government, Ron; I hope you don't teach your children such lawlessness.

People don't want to see MORE politicians get off the hook; they want the law to apply to those who run our government ... no exceptions for the privileged.