As the long, long, long presidential race gets more complicated and at times even interesting, religious questions are playing an increasing role. For a look at what kind of Jewish politician potential candidate Michael Bloomberg is, click here for a piece about the New York Mayor from the Jewish publication The Forward. By the way, we're a long way from being done with religious questions in this race.

PHILADELPHIA -- I'm intrigued by the way what I think of as religious values get transmitted within secular organizations -- and in ways that result in no one objecting. 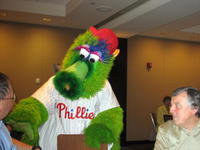 It happened here a few days ago at the annual conference of the National Society of Newspaper Columnists, to which I've belonged for many years.

Last year, as we were meeting in Boston and thinking about where to hold our 2008 conference, someone suggested that we return to New Orleans, where we had met in 2004, the year before Hurricane Katrina demolished so much of the city. The idea of going back was to turn columnists loose to write about the recovery effort that we guessed -- correctly, it's turning out -- still would be going on.

It would be a chance to remind the nation that there still are lots of folks along the Gulf Coast whose lives remain disrupted and who need our help. That seemed to me an expression of the value of caring, in Christian terms, for "the least of these," though Christianity has no monopoly on concern for the poor and needy, a theme found throughout the Hebrew Scriptures.

This year at our gathering in Philadelphia, we went a step further. When my friend Mike Harden of the Columbus (Ohio) Dispatch won the Will Rogers Humanitarian Award, he asked the NSNC to commit at least one hour of our seminar time at future conferences to discussing ways in which we can be voices for the voiceless, for the neediest people in society. For a story about Mike's win (and some other prizes given to other columnists), click here.

At the NSNC business meeting this past Sunday morning, the membership said yes.

It makes me wonder how religious values, in your experience, get transmitted to and through secular organizations. Got any examples?

(As for definitely not-religious values, the picture here shows the Phillies' mascot having some fun with columnists Mike Deupree, left, of Cedar Rapids, and Jonathan Nicholas of Portland, Ore.)

To read my latest Kansas City Star work, click here. (My column tomorrow will describe some of the ravages being experienced by the Christian community in Iraq.)

It is inspiring when Catastrophe's happen, for all the help that comes forward, and all the newspaper articles, radio and TV coverage that happens, and then we go back to normal living, the people affected still have to go on, somehow. Many homes from Hurricane Katrina are still not rebuilt.
Many poor, starving, and homeless people still have to go on, even when charity programs try to help. Darfur for example.

Why? Is there not enough resources on Planet Earth for our Population Explosion. What would be the reason for all the poor, starving and homeless people in the past? Greed? The Haves and Havenots have been with us ever since the Fall of Man, from Equal Sharing and Equality for All Life 'in the beginning', to Inequality, Inhumanity, Greed. Fighting and Killing our Brothers/Sisters of Life.

This Lifestyle has been the constant Killing type of Life ever since.
No matter how much Charity there is, the Crums of the Haves will not Take Care of the Havenots.
We need 100% Sharing, instead of 10%.

Now that we have the High Tech Knowledge of the plight of our Brothers/Sisters all over the Planet, we can see that Fallen Human People are not our Enemies, not some unseen enemy like the Devil or Satan, but real Live Humans. War and rumors of War will continue, until we again Share Equally with All the Crew and All Life on a Home Spaceship Planet. With our population explosion, even the animals and birds are losing a place to live and eat.

With the presidential election this time, it will be interesting to see a Mormon and maybe a Jew running. We have not had this problem in Protestant USA, since President John Kennedy, a Catholic ran and was elected. It did not change our Killing Lifestyle, and I doubt a Mormon or Jewish President will change us either.
It should make us wake-up that the USA is not a Protestant/Christian Country, but a mixture of religions, even if the Protestant religion has ruled for 300 years. Have we really had the Equality of a Democracy, that Jesus taught about and lived, or, were we involved in Inequality, wars and rumors of wars with our Christian Brothers/Sisters and all Children of God on Planet Earth?

Are we following Jesus in the Lifestyle of Equality and Equal Sharing of our Brothers/Sisters, that God Jesus taught and Lived?
Maybe if a Mormon or a Jew is elected, the Killing Lifestyle of Christians will change, or, are all religions about Unequality, Hate and Killing?

Is it about time for All Humans on Spaceship Earth, to put their Actions where their Mouths are, in the Worship of their Gods?
Actions speak louder than Words.

How do the Killing Actions of all the religious people on Earth, make sense to God, the Father of All Life on Earth, that was in Human form? Are we really 'in his image? Did He really say "Thou shalt not Kill? Did Jesus, now part of the Godhead, really say "Turn the other cheek? Why do all the Gods on Earth, bring war instead of Peace?

Does our Home Planet, covered with Nuclear Bombs on land and sea, prove our Love of God the Father and Jesus, or the other Gods? What is the Holy Spirit that is also God, mean for Trinity Christians?

The Crew on Earth should take a High Tech look, at their planetary pollution and bombs Lifestyle, and what they are doing to their Home, which they call living and obeying God. Mouth Worship in pagan temples and Killing, is not Serving the GOD of All LIFE, Fairly and Equally, on our Planet Earth Home.
What happened to the Fair and Equal Caretakers of Life that God put on Spaceship Earth?

I spent 3 months in Australia last year (Melbourne area), staying with my daughter who is working on a post-doctoral fellowship there. As an Episcopal priest, I was naturally interested in learning about the Anglican Church there, and I must say I had a great experience. The church I attended had an enthusiastic bunch of folks, a mix of older folks and young families, and ethnically diverse. I especially enjoyed it when we all stood up and sang, "Advance, Australia Fair" at the end of the service on the 1st Sunday of each month. Apparently the government has asked all the churches to do this so that people will learn the words to what has been the national anthem for a relatively short time. In reference to the article, however, from my limited experience there what it says is true enough. There weren't many folks leaving campus to go to church on Sunday mornings, and my friends at St. Peter's did lament the secularization of their society. But that doesn't make Australia any different from many countries, does it?

The political-religious scene in this country is just plain dangerous these days.

I say that America is great because of its freedom. Americans are great who choose a higher ground for THEMSELVES, not for others. I spit on religious worship out of compulsion. I spit on those who claim their society is righteous, but offer absolutely no freedom to chose anything. I spit on governments that turn religion into law with death as a penalty and then claim moral superiority.

But most of all I spit on politicains in this country who react to attacks on this great country by wanting us to immitate the narrow-minded, totalitarian tactics of the enemy. We don't need any more religious bigots running the world, especially this part of the world. We need great leaders who can inspire people to take the higher road, not compel people to take THEIR road. We need great leaders who will simply condemn those who kill us because we are free, without turning around and removing the freedoms that made this country great.

And the next time we hear some sorry politician wear his religion on his sleeve, Americans need to stand up and say, "We don't care in what god you claim to believe. We only care about who YOU are." And I spit on every politician that uses god as a way to avoid answering who THEY are. They are not their god--no man ever is. Their beliefs in a god are unverifiable and irrelevant; THEIR GOD IS NOT RUNNING FOR OFFICE ... THEY ARE!

Gee, is your mouth dry from all that spitting?

Ready to spit some more, then, JT? Tomorrow's another day, ya know...

"The Critic spits on what is done,—Gives it a wipe,—and all is gone."
- Thomas Hood

"Beware of spitting against the wind!"
- Friedrich Nietzsche

"Be quiet! Anyone can spit in my face, and call me a criminal and a prostitute. But no one has the right to judge my remorse."
- Jean-Paul Sartre

"Having resumed our seats in the canoe, I felt the Indian wiping my back, which he had accidently spat upon. He said it was a sign that I was going to be married."
- Henry David Thoreau

"You don’t hit a child when you want him to stop hitting. You don’t yell at a children to get them to stop yelling. Or spit at a child to indicate that he should not spit. Of course, you want children to know how to sympathize with others and to “know how it feels,” but you ... have to show them how to act—not how not to act."
- Jeannette W. Galambos

"Whose denizens can turn upon the world
With spitting tongue, an odor, talon, claw,
To sting or soil benevolence, alien
As our clumsy traps, our random scatter of shot.
She swept to the kitchen. Turning on the tap,
She washed and washed the pity from her hands."
- Carolyn Kizer

"It is an old saying in the town that “most any fellow with a chaw in his jaw can sit on his front porch and spit down the chimney of a neighbor’s house.”"
- Administration in the State of Ariz

People who attack nations without cause are really dangerous, and people who do it in the name of religion should be spat upon -- Just Thinking

Oh, yes, and people who defend those who attack nations without cause just because they're one of their own are good-ole-boys who share in the sins of that they defend. They should also be spat upon. -- Just Thinking

Woman who find cute quips about word spit, but who does not address content or issues spits in the face of everyone. -- Just Thinking

Jeepers. Was that a big 'ol wad of chaw that came down my chimney and landed in my fireplace????

Hahahahahaha! That was too good.