An editorial in the Concord Monitor in New Hampshire makes some really good points about the attention presidential candidates -- especially Democrats -- are paying to religion. Maybe this one should be posted in the campaign headquarters of all candidates.

NOTICING THE RELIGIOUS FABRIC OF AN URBAN CORE

PHILADELPHIA -- I love wandering around big cities and noticing the various ways in which religion helps to form the urban texture. 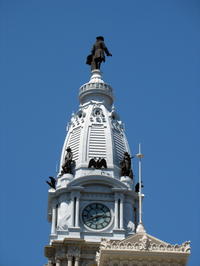 For instance, when I was here over last weeknd in the City of Brotherly Love, my wife and I wandered around downtown for a bit, staying within a few blocks of our hotel, where I was attending the annual conference of the National Society of Newspaper Columnists (a wonderfully wonky group that used to have me as its president).

At any rate, right across the street from us was the old First Baptist Church, founded in 1698 -- several years before I became a columnist.

In addition to other churches, and City Hall, atop of which sits a statue of William Penn (pictured first here) holding the Charter of Pennsylvania, which says Penn wants to convert native Americans to Christianity, we saw several other wonderful old churches, not to mention Muslims and Sikhs walking the streets.

And when I was here on business in February, I had a chance to visit a downtown synagogue. Click here for an entry on that. 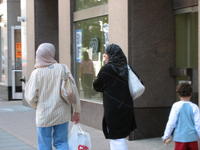 So today, just enjoy these pictures of St. John the Evangelist Catholic Church, a big old Methodist church, William Penn atop City Hall, an old Presbyterian building, Muslims women and a Sikh man on the sidewalks and, of course, the L-O-V-E statue in a downtown park, proclaiming the most important lesson of any religion.

And notice, please, the way these buildings and people are woven into the urban fabric.

Oh, and if you recognize that cool-looking guy by the L-O-V-E statue, it's because my bride is a good photographer. 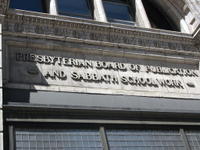 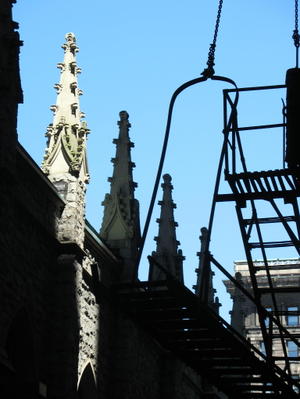 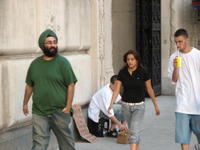 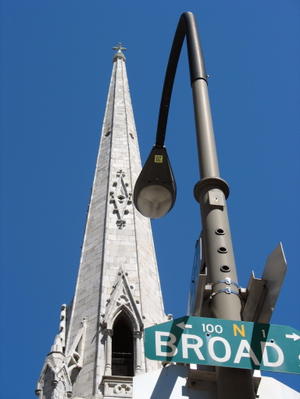 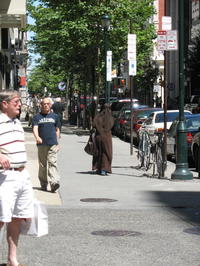 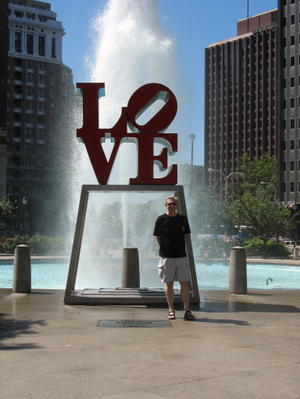 Thanks for all the pictures of space rockets (spires) on churchs and the city hall.
Since I am into High Tech, I see all kinds of construction that resembles our spaceships and rockets and bombs, rememberances of the past Fallen High Tech Society of the Noah/Atlantis times, and the Colonization time of Earth, by our High Tech Ancestors. Life did not 'evolve' on Earth.

Without High Tech Knowledge, All the thunder, lightning, loud noises, etc., in the Old Testament, translated as God in the Christian Bible, and other activities of God on mountain tops, was the High Tech activity in the past.
Whether from our High Tech Ancestors or the High Tech Noah/Atlantis Society, needs to be looked into, as to who the God on the mountain that killed was. It was not the High Tech Peace God that colonized Earth, that Jesus is with.
All depiction of Gods, Man Gods, Goddesses, and Angels, in all religions and myth, are not the Peace God.

Hope someone starts a High Tech translation of the Christian Bible soon.

There needs to be a grassroots movement against everyone who is using religion to get elected. If their actions don't prove who they are, then they should not be elected.

Just because someone says they are a Christian means absolutely nothing. There is no way to verify what a person believes, and politicians are notorious liars. So check their voting records and their other relevant experiences. Religion is simply becoming dangerous in this country.

It's like the Catholic Church claiming that it wants to clean up the problem of sexual rape of children, and yet there is absolutely no change in oversight of the Churches. The entire problem is with the overseers of that den of child rapists, and the lack of change at the local level is proof that there is nothing they want to do to change it, regardless of their empty words. Similiarly, the politicans claim they want Christian change, and yet here we are in a war against a country that gave us no valid reason to attack them. Their people are being killed, our soldiers are being killed, and the only thing they do is pass laws making it illegal to show the coffins as they're unloaded from the planes. Oh yes, they also pass laws making it illegal to hold up a protest sign within 2 miles of a presidential motorcade.

We have vermin in control of Churches and government, and the sheep of this country just turn a blind eye because the wolves call themselves Christian.

The entire problem in Iraq right now is because of a war that we launched without cause. There is simply no excuse that now justifies the war we launched against Iraq. NONE. We are entirely to blame for the mess other yet. And yet our corrupt politicians tell us that we cannot relinquish our corrupt power, or the whole place will fall apart! Oh, yeah, and without our errors there would have been NO problem! Ironic, isn't it?

The power structure of the Catholic Church, the absolute and un-monitored power is the cause of their sexual abuse scandals. Nobody else. The powers that be in that Church are entirely to blame. And yet they claim that the whole thing would fall apart if they change their power structure at all, if they did anything to allow local oversight. Sounds similar to our corrupt government, too. The Catholic Church is not Christian by its actions either--it wants simply to maintain its absolute power.

Mark 9
33 They came to Capernaum. When he was in the house, he asked them, "What were you arguing about on the road?" 34 But they kept quiet because on the way they had argued about who was the greatest.

35 Sitting down, Jesus called the Twelve and said, "If anyone wants to be first, he must be the very last, and the servant of all."

The Concord Monitor is correct: Issues such as health care and poverty are moral and religious issues.

Elders (Bishops, overseers, Pastors) were appointed in EACH CHURCH, Jenkins, from within the congregation. Each Church must have Elders, plural, Jenkins. It's completely backwards to have some Bishop outside the local Church and over several Churches. That was never authorized by the Apostles or by Jesus Christ.

Finally, when the Apostles died, there were no new Apostles. Not even your Pope is foolish enough to declare himself to be an Apostle. There simply is no authority for some position over the Elders, other than Christ.

The Churches functioned independently and autonomously until the Bishop of Rome declared supremecy over all the others. There was no authority for such a position, as is evidenced by the fact that Rome called for a VOTE. Well, new authority in God's Kingdom is not created by human vote.

I posted that last message on the wrong day. Just ignore it.

"The Churches [congregations?] functioned independently and autonomously until the Bishop of Rome declared supremecy over all the others."

"I posted that last message on the wrong day. Just ignore it."