ANOTHER CONTROVERSY ABOUT ISLAM

PBS is under pressure to air a documentary about radical Islam. No matter what your view of Islam, terrorism and related subjects, I say the more voices heard on this the better. Broadcasters must avoid being irresponsible and airing propagandistic garbage, but there are lots of legitimate views about the state of Islam today, and better to hear them than to ignore them.

A MORAL QUESTION FROM VIRGINIA TECH

When someone who belongs to a group to which we're connected does something awful, what responsibility do we have? And what guilt should we feel? 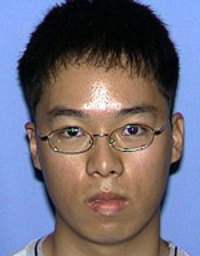 This is a little different from the question of whether we are "our brother's keeper," in the biblical words. Rather, it goes to the issue of whether we somehow are morally or ethically connected to people who embarrass us by their behavior.

This matter was the subject of an interesting story recently in the Jewish newspaper, The Forward. It noted that the sister of the Virginia Tech gunman, Seung-Hui Cho (pictured here), almost immediately issued a statement describing the family's sorrow at what Cho had done.

And after that the South Korean ambassador to the U.S. urged people of Korean ethnicity to examine their hearts.

I know from Muslim friends that they hold their breath when there's word of a terrorist attack anywhere because they fear someone identified as Islamic will be involved and that this will put them in a defensive position as people think of them as guilty by association.

When people in groups to which I am connected (journalists, Christians, German-Swedish-Americans, tall, incredibly handsome guys, etc.) make the news for bad things they've done, I rarely feel any personal responsibility, though I do worry that people will think all journalists, all Christians, etc., are somehow the same and equally guilty.

But where do you draw the line on taking responsibility or feeling guilt. What does your faith tradition, if any, tell you about that? If Cho had been part of some group connected to you, how would you have reacted? (And, yes, in some sense Cho was part of a group connected to all of us -- a human being. And maybe that's as much categorizing as we should do.)

Taking responsibility and feeling guilt is part of the fallen Lifestyle on Earth. We are all Mis-bred, and have Good and Evil Genetics, some more good, and some more evil. No one gets to pick their parents, or their genetics, or defective bodies, or their environment. At least their environment until they are adults.
How we interact with the genetics of parents, family, friends, and our attraction to other elements, is in our genetics and environment. Good or Evil, we do not get a choice when we are born by Body Birth on a planet.

We on the Blog, are thankful we were born, or are a citizen, in the USA. But how many in the USA are not thankful? How about anywhere else on the planet. Who are the chosen few that are the Haves? If we had a choice to pick, where would we go? Why not have an Equal Have Society around the whole world? What cause Humans to be Havenots, and Divide, Kill, and Conquer?
I accept the Original Sin of the Pure-bred Adam and Eve Colony was Inbred Body Birth, that has resulted in all the Mis-bred Humans ever since, with Division, Disease, and Death, the result
of Inhumanity, Inequality, Greed, Hate, Killing, and War.

I think it is time to quit blaming people and blame the cause, specifically, not 'the Devil made me do it', nor blame God. God did not give us Mis-bred genetics, Body Birth did.
I guess Humans on Earth will not Kill everybody, with our nuclear bombs before we reach Judgement Day. At least that is how I understand the Christian Bible.
There cannot be Peace on Earth, but those that get to go to the new planet in 'regenerated' Pure-bred Bodies, can have Equality and Peace, if they do not 'fall' to Mis-bred Body Birth.

May the Peace that passes understanding on a killing planet, return to Earth soon.

I wonder if the Cho family had not come to America and change their environment, if their son would still have become a killer. How much did the environment play in the actions of Sung-Hui?

If the USA has more people genetically attracted to guns, I guess that is what determines the laws. Is that why we have the most nuclear weapons of mass destruction also. Does that mean we have more Killing genetic people? Why are there wars and rumor of wars all over the planet?

What did the Christian God and Jesus command? Does the weapon environment lead to killing, war, and death? Why do little children also kill with guns? Is it OK with God for hunters to kill animals?
Many Lifestyle questions need genetic and environment impact answers.

ISLAM IS A
FALSE, A VIOLENT RELIGION...IT SAYS IN THE QURAN TO CONVERT EVERYONE, OR KILL THEM..EVEN MOHAMMED WAS A VIOLENT PERSON...I SEE NO GOOD IN THIS RELIGION AT ALL

WHY IS CHRISTIANITY A KILLER RELIGION?

THE PEACE GODS OF CHRISTIANITY WERE NOT VIOLENT KILLERS.
THEY SAID 'THOU SHALT NO KILL' AND 'TURN THE OTHER CHEEK.

SO, WHY DO CHRISTIANS KILL? WHO IS THEIR GOD? THE PEACE GODS?

IS THERE ANY RELIGION ON EARTH THAT DOES NOT KILL?

If the moderates of Islam cannot or will not speak up against the radical leadership, then the moderates need to recognize that the only appropriate action remaining for the rest of the world is to condemn the entire religion in a wholesale fashion based on the actions of the radical leadership. Far too much of Islam functions more like a blood-in, blood-out gang than as a bona fide religion. And it's not the job of PBS to incur the wrath of radical element in order to save that religion from itself. If it's not important to those in the religion to save the religion, then why in world should the rest of us care to save it?