The other day someone shared an e-mail with me from a man who had just returned from a trip to Jordan in which visiting Christians attended lectures and seminars on interfaith and related matters. One of the speakers was Jordanian Prince Al Hassan bin Talal, who some years ago was instrumental in creation of a group called the Royal Institute for Interfaith Studies. I frankly didn't know much about all of this and was glad to learn. Then just yesterday I discovered this press release that describes a two-day conference on religion and reform under Prince Hassan's sponsorship. (I will warn you that the press release has not been translated into English very clearly.) At any rate, the prince appears to be an interesting force for religious understanding in the Middle East, and worth learning more about. Any of you familiar with him and his work?

SACRED SPACES AROUND THE U.S.

As I've mentioned here before, every month or two, I take members of my church on a tour of sacred spaces in the Kansas City area -- churches, synagogues, mosques, temples. 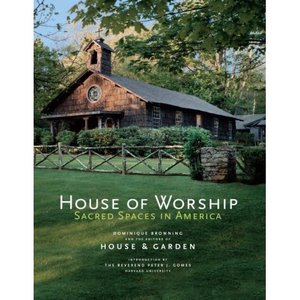 In fact, the next such tour will happen in a few weeks, and we'll be visiting a mosque and two predominantly African-American churches.

My family, of course, is aware of my interest in the architecture and geography of religion, so for my recent birthday I received a wonderful book that I recommend to all: House of Worship: Sacred Spaces in America, by Dominique Browning. The Rev. Peter J. Gomes of Harvard University has written the introduction.

Although no Kansas CIty structures are included, the book is a beautiful collection of words and pictures describing sacred space in many parts of the country -- from a cathedral in, of all places, Fargo, N.D., to America's oldest synagogue in Newport, R.I. Well, I say no Kansas City structures, but two are included (back to back in the book, in fact) that are close by.

First is the Saint Lawrence Catholic Campus Center at the University of Kansas in Lawrence. And the other is the stunning Marjorie Powell Allen Chapel at Powell Gardens east of Kansas City.

It pleases me, as a Presbyterian, to say that one of my favorites in this collection is First Presbyterian Church of Stamford, Ct., an astonishingly beautiful sanctuary, the entire walls of which are stained-glass windows. (The link to the church's Web site shows some recent restoration but no really great pictures of the breathtaking sanctuary.)

As Gomes says in his introduction, "All worship spaces, from the great cathedrals to the smallest storefront Penecostal temples, suggest something more than the private agenda of those who visit them. . ."

To me, they suggest our acknowledgement that we are a small part of a sacred history that began long before we arrived and will continue long after we're gone.

As usual, my remark is that any reform to join all the religions together, in one understanding about LIFE, and Eternal Physical Life After Birth instead of Life?After Death.

The element for this Understanding, is a High Tech Science Physical Translation of all Supernatural religious scripture and myth.

Then we will understand all the wasted resources and land areas, of all religious buildings, and mouth worship for the One GOD, and Trinity Man Gods like our High Tech Ancestors and Jesus.

It's hard to be sure that it's the same book, because the belief.net site fails to give the author, but you can access a slideshow for the book, "House of Worship" here:
http://www.beliefnet.com/story/209/story_20921_1.html

It is the same book, Patricia. Thanks for the link!

Thanks Bill, Patricia and Keith. Viewing the slide show was a lovely experience. A calming respite in a busy world.

David Brock made these comments:
- God created the Church -
No Man did. Every facet of it. From the actual buildings, to the costumes, to the books, to the laws.
Like I said... It's either ALL man-made so pointless. OR It is the work of a God and if so it must indeed be a most unpleasent God. Either way the only thing to do is avoid it all."

Like I was led to understand the Temple of the GOD of LIFE of the Universes. Man Gods, our High Tech Ancestors were the creator of our Eco System, and all Life as we know it. GOD's Temple is LIFE, and the Universes, Not temples made by Human Hands. In the Past, the pagan temples were made by human hands, for pagan Gods.

Now with the increase of Human knowledge of High Tech Colonization and Pure-bred reproduction, we can see Fallen Man today is also caught up in pagan worship in temples made by human hands.

Are we ready to change from Killers of the Temple of GOD, to Caretakers of our Home Planet,and the LIFE on it, the Physical LIFE TEMPLE of GOD?

I give up, Dolores. Who is Dave Brock, and why should I care? Is he just another poster in the blog?

Keith.
Yes he is just another poster in the blog. I thought he was on the blog I posted, but maybe it was another one in this same block of 'On Faith' blogs.

I thought his remarks give some meaning to my understanding of pagan temples.

I will check again and see where he posted those remarks.

Keith, here is the web address:

People are making remarks about a remark by Bill Press.

The complete url is http://newsweek.washingtonpost.com/onfaith/guestvoices/2007/01/why_would_a_loving_caring_god.html