A VOTE TO DEFINE MARRIAGE

The U.S. Senate is to consider the controversial Federal Marriage Amendment next week. So far, most of the words about this anti-gay legislation have come from people who would identify themselves as religious conservatives. Now other religious voices are speaking out against the amendment. To read about those voices, click here. To read about efforts of proponents to pass the amendment, which would prohibit same-sex marriage, click here. For the official text (and related material) of the proposed constitutional amendment, click here.

Whatever you think of Bill Moyers (pictured here) -- brilliant and gentle man, pollitical hack, insightful questioner, liberal wimp -- LBJ's former press secretary always seems to be up to something interesting. 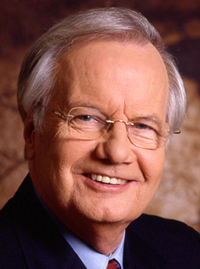 Starting June 23, he's coming back to PBS with a seven-part series of hour-long interviews with people about religion and public life. It's called "Bill Moyers on Faith & Reason."

I thought that the series Moyers did a few years ago, "Genesis: A Living Conversation", was well worth the time to watch, even if a few of the participants didn't add a great deal. My hope is that the new series, featuring such people as Salman Rushdie and Richard Rodriguez, will be up to that pretty high standard.

The reality is that we need more -- not fewer -- options to hear thoughtful people talk about the way religious belief affects our lives, both private and public. As I've noted before, it's hard to read any news story in the paper these days that doesn't have some thread of religion running through it. The problem is we tend to get boxed into our tiny spheres of belief and are unable to be both deep in our own religious traditions and yet open to learn from others at the same time.

That combinations of depth and openness is the mandate, it seems to me, in a time when religion run amok has caused so much harm in the world. Maybe the new Moyers series can be part of the solution.

To read my latest Kansas City Star work, click here. (Just a reminder: If you generally check in here early in the day, you might want to come back later in the day to read any comments left since you left. Some days there's some really good back-and-forth. Other days y'all seem to hold your tongues.)

The fanatics in AZ are working hard to get their "marriage protection" ammendemnt on the ballot. The Star lists the number of letters it gets in a week. Most last week said to keep those damned Mexicans on their side of the borde. Baja AZ the liberal wing of AZ, just voted a regessive sales tax for 20 years to build roads.

I came here in 1951 as a conservative (with money) Replican and suffered culture shock. back then, we had freedom FROM religion.

When Governor Jack purged all of the voter registrations in AZ, it was like an apostolic laying on of hands to get reregistered because the registrars were no longer registered.

I was still a believer but the GOP pulled the rug on me so I am now a Democrate with all its warts.

Best I quit becuse I am just griping.

I look forward to Bill Moyers. I still replay Spirit and Nature.
So note I am ending on a plus.

That's why it bothers me to read things like "anti-gay legislation". The legislation isn't anti-gay, it's merely anti-gay-agenda. It doesn't seek to harm the person, but rather debases the notion that homosexuals have the right to redefine marriage unilaterally.

Another one that hits particularly close to home is "Christian" and "Christianity". You can add "Christ" to that, as well. Some uninformed sources would have you believe that Christians worship according to Christianity, exactly the same way Christ did. In fact, Christ was Jewish, and worshipped acording to Jewish traditions. Christians are supposed to follow the teachings of Christ as revealed in Scripture. There are cases where this means, "Do as I say, not as I do."

Christianity, as a religion, is subject to the same faults and fallacies of any organization devised by the minds of men. The logical assumption would be to lump all practitioners of Christianity into the Christian camp, and identify them with Christ. The truth is, the terms are not interchangable. Christianity has faults that Christ never had. Christians suffer failures where Christ succeeded. Indeed, some "Christian" churches have divested themselves so completely of sound doctrine that they no longer teach from Scripture.

My point is, people have failed. Christ has not. We have forsaken truth for comfort, piety for consensus, liberty for license. You will never find a true Christian practicing sound doctrine that hates people. Sure, we hate the sin in the world, but not the people trapped in that sin. For true Christians, we are not encamped against a world full of enemies, but rather are called on a rescue mission to the world. If that qualifies me as a fanatic, so be it.

While I can't comment on whether you qualify as a fanatic, I think I can elucidate you tenuous grasp of facts in statements like this:

"The legislation isn't anti-gay, it's merely anti-gay-agenda. It doesn't seek to harm the person, but rather debases the notion that homosexuals have the right to redefine marriage unilaterally."

1. The legislature certainly is "anti-gay" since it writes discrimination against an entire class of people into the Constitution.

2. There is no "gay agenda." That's a boogeyman dreamed up by pseudo-Christians and other extremists on the far right political fringe. If there was a "gay agenda," it would be far from the nefarious plans envisioned by zealots such as Falwell, Dobson, Robertson, et al. Instead it could be summed up succinctly as: To be treated equally with the same dignity and respect due any other human being.

3. These anti-gay proposals do, indeed, hurt people. It could affect the ability of one partner to provide health insurance for the other partner. It could prevent a partner from visiting the other partner in a hospital or making decisions together about the hospitalized partner's health care. It could deny partners the 1,300 and some rights that are automatically afforded opposite sex couples the moment they say "I do." There are countless other examples of the harm these laws could do, but I'll just include one more ... it restricts an entire class of people to second-class status. You'd have thought we had learned that lessons after our horrendous treatment of Native Americans, or African Americans, or Irish immigrants in the 19th century, or Japanese Americans during World War II. Those examples weren't very "Christian" then and the current spate of legislation aimed at discriminating against gays and lesbians aren't very "Christian" now.

I appreciate your attempt to elucidate my tenuous grasp of facts. I'm always willing to listen and learn. However...

1. What is discriminitory is defining the glbt community as a separate "class of people". The legislature, in reflecting the will of the constituency in accordance with established constitutional procedures, is doing its job. Just because your opinions aren't consistent with the majority of Americans doesn't mean you get to claim discrimination.

2. I did a Google search for "GLBT Organizations". There were 1,160,000 results. This represents hundreds, if not thousands, of gay and lesbian rights organizations, each of which has a stated agenda. I'm not saying that those agendas are bad, I'm merely saying that they are inconsistent with what I believe, and what most Americans believe. Note that I'm not using the term "nefarious" to impugn the motives of people I don't agree with.

3. Every right that I have as a heterosexual married man is available to homosexual couples. Those rights may not be automatic, but they are available. For instance, a homosexual couple may need to work with a reputable attorney to forge a durable power of attorney, and certainly should have a living will in place. Setting up these devices may seem a bit inconvenient, but we don't have a constitutional right of convenience. Health insurance might cost a bit more, but we don't have a constitutional right to a bargain, either.

Ultimately, these are the consequences of choosing a lifestyle that is inconsistent with mainstream society. I'm no stranger to that concept, as Christians are called to , "be not conformed to this world". I also face the consequences of my choices, but I do so with responsibility and accountability, not with claims of discrimination.

Let's not forget, millions of Christians have died for their faith, and to protect the lives and rights of the innocent. We don't require others to believe as we believe, but we offer the truth to those who will hear. You were correct in your assertion that the discrimination against Native Americans, African Americans, Japanese Americans, Irish immigrants, etc. wasn't very "Christian". That discrimination was never a part of the Christian agenda. We proudly espouse our agenda, and make it available to anyone who wants to read it, rather than claiming that it doesn't exist. It's called the Bible.

Still, this debate is not about Christianity, but about the rule of law. Discrimination is illegal, and it's immoral. The actions of a legislative body to legally change the constitution with the support and consent of the people is not discrimination. That's just the way our nation makes decisions.

Debating issues is pointless with someone who holds such as erroneous idea as this:

"Ultimately, these are the consequences of choosing a lifestyle that is inconsistent with mainstream society."

First off, being gay is not a matter of choice. Our sexual identities are our own individual gifts and exist along a continuum. Our only "choice" ... whether gay or straight or something in between ... is to choose to love and allow ourselves to be loved as God made us.

Secondly, I hear the word "lifestyle" bandied about by religious conservatives. The word, however, means absolutely nothing since there is no "gay lifestyle." By the same token, there is no "straight lifestyle" either. Referring to a "gay lifestyle" has all the validity of me making assumptions of a "straight lifestyle" based solely on examples I've seen on TV shows like "Cheaters" or "Who Wants to Marry a Millionaire" or even Britany Spears' infamous 52-hour marriage.

As for your assertions that "Every right that I have as a heterosexual married man is available to homosexual couples. Those rights may not be automatic, but they are available." Your argument is clearly discriminatory. If two people are in a committed, loving relationship, why should one couple have to jump through all sorts of hoops to obtain the same rights as another couple receives automatically. There simply is no logical reason to grant automatic rights to one couple, but make a second couple go to the time and expense (and yes, it is expensive to hire a lawyer to make sure wills, durable powers of attorney, and other necessary legal documents are in order) to receive the same rights. Seems to me that such a system only invites future litigation that will only end up overturning the system those who want to write discrimination into the Constitution are claiming they want preserved.