Is the movie (and book) "The Da Vinci Code" the best recruiting tool Opus Dei has ever had? Reports suggest exactly that. (Watch for conspiracy theorists to suggest Opus Dei paid Dan Brown to write the book. Uh, or not.)

A VOTE FOR GOD

While the pope is in Europe now, he may be happy to learn that the fight over whether to include God in the European Union's Constitution isn't over. Germany's chancellor says she'd like God mentioned in the Constitution. By the way, a good way to follow the pope's trip to Poland through the eyes of probably the best reporter and commentator on Vatican matters, John L. Allen, Jr., Rome correspondent for the National Catholic Reporter, is by clicking here.

A LITTLE SHARING OF BLOGS

It's always risky when a blogger recommends other bloggers. The fear is that readers will spend so much time at the other sites that they'll never come back. 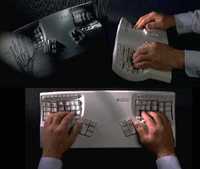 But I'm not scared. I know you'll be back to tell me to quit sending you to bum sites or to thank me for lighting up your life with good sites. Right?

At a seminar I attended recently in the Washington area, I met Neela Banerjee, religion reporter for The New York Times. Since then she's been helpful to the 30-plus religion writers who attended the seminar by passing along useful Web sites and such.

The other day Neela mentioned four of what she considers watchdog websites, meaning they tend to keep track of journalism coverage of religion.

I thought you might enjoy poking around on the sites this weekend, so here are four. By Neela's description, the first one, getreligion.org, tends to lean to the right. The others tend to lean to the left. But you can make that -- or a different -- call yourself.

2. Streetprophets.com (an offshoot of dailykos.com).

So tell me what you learn from them that you wouldn't have found out otherwise. By the way some of those as well as other blogs can be found on Beliefnet.com's Blog Heaven.

To read my latest Kansas City Star work, click here. (My column in Saturday's Faith section is about fear that casts out love. And don't miss the colorful photo essay in that section on sacred structures in our newly redesigned section.)