'IN GOD WE TRUST' ZAPPED

Clearly we Americans haven't finished negotiating the location of the line between protecting religion from the state and protecting children from something a lot of people think won't hurt them. A new Texas example shows where the battle continues to be fought. How much do we need to protect children from religious ideas that might offend them? This much?

One evening last week I was transported back to my high school days -- and, for some reason, to an odd but important spiritual moment. 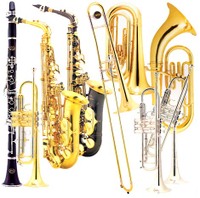 I attended a concert of a local high school band that was trying to raise money for new uniforms -- the very Kansas City high school, Lincoln College Preparatory Academy, from which my two daughters were graduated some years ago.

At any rate, the uniforms reminded me of the uniforms our high school band wore when I played the oboe. And I drifted back in my memory to those long-gone days in Woodstock, Ill. As I was pondering being a high schooler again, I remembered reading Of Human Bondage by W. Somerset Maugham, and I recalled, especially, the bad idea it gave me that through me for a spiritual loop for a time.

There's a character in the book named Cronshaw who gives to Philip, the main character, a Persian rug.

Here's part of Chapter 106: "Thinking of Cronshaw, Philip remembered the Persian run which he had given him, telling him that it offered an answer to his question upon the meaning of life; and suddenly the answer occurred to him: he chuckled: now that he had it, it was like one of the puzzles which you worry over till you are shown the solution and then cannot imagine how it could ever have escaped you. The answer was obvious. Life had no meaning. . .

"There was no meaning in life, and man by living served no end. It was immaterial whether he was born or not born, whether he lived or ceased to live. Life was insignificant and death without consequence. Philip exulted. . .

It was the sort of simplistic and sophomoric (I think, actually, that I was a sophomore when I read the Maugham book) conclusion likely to appeal to a searching teen-ager, and it took me several years to untether myself from it.

Perhaps my experience is not so uncommon. It's why young people need solid spiritual leaders they trust (I didn't), leaders to whom they can put hard, doubting questions. As I've said before, the road the faith inevitably leads through the valley of doubt. If you get stuck in false certitude before ever getting to faith, you wind up in a very different place. A good guide can help young people avoid that.

Now, how do you suppose Jesus felt about political correctness?

Maugham's work is considered a classic, but I wonder how many people realize that he has essentially rewritten the book of Ecclesiastes with a different ending? Solomon's work begins...

Sounds like Maugham, doesn't it? However, the conclusion Maugham reaches is merely the beginning of Ecclesiastes. Solomon goes on to describe why the world is meaningless, and how meaning can only be found in God. Solomon ends his work with...

"13 Now all has been heard;
here is the conclusion of the matter:
Fear God and keep his commandments,
for this is the whole duty of man.

14 For God will bring every deed into judgment,
including every hidden thing,
whether it is good or evil."

Solomon went on to write other books describing the very meaningful life he found in service to God. After you read Ecclesiastes, keep going into Song of Solomon, then back up and catch some of the Proverbs. I think you'd conclude, as I did, that Solomon found plenty of meaning.

Since many Christians are upset when they are asked to remove their religious beliefs from official government promotion (i.e. "In God We Trust" or "Under God" in the pledge) and non-Christians get upset when Christian beliefs are thrust upon them by the government, let's split the difference. We'll leave "In God We Trust" on the quarter since Christianity is the majority religion and the quarter is the most used coin. However, we will include different statements on other coins. "In Allah We Trust" goes on the dime. The nickel gets "In YHVH We Trust". With "There is no God" on the penny.

Good one, Steve. I like it. One of the coins would need to read, "In Jesus We Trust," or at least "In the Trinity We Trust," though. "God" is pretty generic, don't you think?

In a similar vein, I've often thought that if a church had an American flag in the sanctuary, it should also have the flags of several other nations too, to do a better job of representing God's perspective. As Pablo Casals famously said, "Love of ones country is a natural thing...but why should love stop at the border?"

Steve's idea has one important benefit: It would call attention to the fact thal all religions don't worship the same god. However, now that many people, because of political correctness, interpret "In God we trust" as refering to gods other than the Triune God, perhaps it is best to leave this phrase off our currency. God is not generic.