THE 'CODE' DOES WELL DESPITE VATICAN

The Vatican's call for people to boycott "The Da Vinci Code" movie has failed in Italy. In fact, the film set box office records there. Wonder how many of those who attended were descended from the marriage of Jesus and Mary Magdalene. (Uh, that's a joke, folks.)

A PAPAL MOVE ON ABUSE

Time Magazine's online edition reports that Pope Benedict XVI has severely disciplined the founder of the powerful conservative organization Legionaries of Christ because of sexual abuse allegations. At least one observer calls this a stunning move and a triumph of right over loyalty. For a more complete account by John L. Allen, Jr., Rome correspondent for the National Catholic Reporter, click here. For the Vatican's confirmation of this action, click here. It will be fascinating to see the ramifications of this.

THE DIFFERENCE BETWEEN BELIEF AND FAITH

Several years ago, as I was preparing to teach a writing class at Ghost Ranch, the national Presbyterian conference center in northern New Mexico, I discovered a wonderful French Reformed Christian writer named Jacques Ellul (pictured here), who lived from 1912 to 1994. 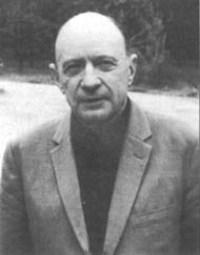 I especially found his book Hope in Time of Abandonment poignant and helpful for the class I was about to teach, called "From Pain to Hope Through Writing." (By the way, I'll lead a long weekend version of that class in October at the Kirkridge Retreat Center in Pennsylvania. Come join me there.)

At any rate, recently someone sent along to me an extended excerpt from another Ellul book, Living Faith, in which he seeks to differentiate between the idea of "belief" and the idea of "faith." I'm not sure I buy all of his notions, but he certainly got me to think about what my ideas are.

You can read the entire six-page excerpt at the link I've given you in the previous paragraph here, but while you do, ponder these quotes from Ellul:

* "Belief provides answers to people's questions while faith never does."

* "The opposite of doubt isn't faith, but belief."

* "Belief is reassuring. People who live in the world of belief feel safe. On the contrary, faith is forever placing us on the razor's edge."

Well, roll around in that for a bit and give me your reaction.

By the way, Ellul is sometimes described as a "Christian anarchist," based on his 1991 book Anarchy and Christianity, which I have not read. The first person who reads it and reports on it to me wins, uh, my thanks.

Speaking of Ghost Ranch, I'll be co-teaching a seminar on Jewish-Christian relations there in August with a rabbi. I invite you to take a look at the course description and to come join us. We'll have a chance that week to learn each other's story and even to have some fun. If you're Christian, bring a Jewish friend. If you're Jewish, bring a Christian friend. If you're an adherent of another religion, come and join the conversation.

Regarding the difference between belief and faith...

While I agree that there are differences between belief and faith, and I find Jaques Ellul's points interesting, I'm not sure I agree with him entirely.

Faith is described in two ways in Scripture, and defined once. The Old Testament describes faith as a function of trust in the nature, character, and integrity of God. The New Testament describes "pistis" faith, or a faith founded in conviction, being convinced beyond a reasonable doubt.

"Now faith is being sure of what we hope for and certain of what we do not see." (NIV)

I can't think of a better way to live than with this kind of faith.