Even in Asia, some Christian leaders are all up in arms about the new movie, "The Da Vinci Code." It's hard to imagine how any movie's critics could give it more publicity than some Christians have given this one. No doubt in some ways PR equals PR -- public resistance equals public relations.

WHO SAID THAT ABOUT GOD?

All of us can toss around quotes about religion -- and sometimes we're even sure of the original source.

A year or two ago, for instance, I wrote a column mentioning the results of a national survey that showed the most well-known and commonly used quote from the Bible is this: "God helps those who help themselves." Well, as I pointed out in the column, not only is that not found in the Bible, but the theology behind it is essentially unbiblical. 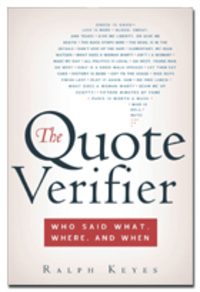 Where can we go to verify such quotes?

You've come to the right place today for an answer. You can go to the work of a guy I met in 1992 in Columbus, Ohio, where he was one of the speakers at the annual conference of the National Society of Newspaper Columnists. His name is Ralph Keyes, and his new book is called The Quote Verifier.

Among other things, Keyes (whose last name, by the way, is pronounced Kize, not Keez) teaches writing to ministers, mostly Baptist, in a doctoral program. So when he decided to put together this book checking on the true sources of various quotes, he included some faith-based quotes.

You'll also find interesting entries on such phrases as "Religion is the opium of the people" and "The Lord works in mysterious ways."

As for the increasingly common phrase, "I read it on the Bill Tammeus blog," well, I may have been the first one to say that -- just to get it started.

To read my latest Kansas City Star work, click here. (By the way, our Faith section in this Saturday's paper will be redesigned and printed on our snazzy new presses. Take a look.)

Regarding the DaVinci Code...

I think it's great that people are using the book and movie as a basis to ask good questions about history and theology.

I think it's foolish to use the book or movie as the basis for any answers to those questions.

I agree with you, SC. I think the problem, though, is that in a non-Christian environment, the population is unlikely to be able to tell the questions from the answers.

Quoting from the article to which Bill linked us:
"A coalition of Christian groups in Thailand, which is more than 90 percent Buddhist and less than 1 percent Christian, demanded that censors cut the last 15 minutes of the movie, which reveal that Jesus' lineage has survived to this day."

Indeed, we Protestants don't often have a very firm grasp of church history, and may be vulnerable to believing some of the fictional elements in the story. I guess that's why the Vatican itself seems to be in the forefront of the damage control effort.

Exactly, Dave. The book and movie, like any work of fiction, only captivates its audience because of "suspension of disbelief". Dan Brown doesn't have to convince his readers that the story is true, only that it COULD be true.

When Christians aren't well versed in the truth of early church history, we have a much harder time explaining the facts and debunking the myths in an authoritative way. Unfortunately, we wind up coming off defensively, which is exactly how the book portrays the response of the church to any question of church history. We wind up supporting Dan Brown's portrayal of the church through our ignorance of our own history.

I find it interesting that everyone says the fiction of The DaVinci Code obscures the "truth" of early Christian history even though there is as much independant evidence in support of Dan Brown's assertions as the assertions of the Christian church. The "truth" is that we don't know the truth of Jesus' divinity or if he died on the cross.

Actually, there is no independent evidence that supports Dan Brown's assertions. There are hypotheses, wild suppositions, and outright misstatements, but no evidence. A made-up story written hundreds of years after a historical event without any corroboration or first-hand testimony does not constitute "independent evidence."

There is 2000 years worth of the most exhaustive manuscript, archaelogical, and scientific evidence that supports the accurate historical record set forth by biblical scholars. There is actually more evidence to support the Gospels than there is to support the existence of Julius Caesar. For a start, you can take a look at "Evidence That Demands a Verdict" by Josh McDowell. Lee Strobel also has done some excellent work in compiling evidence. You can visit his website at http://www.leestrobel.com

Actually there is no independent evidence to support either story. Both are based on "hypotheses, wild suppositions, and outright misstatements." There is not a single independent, contemporary writing that mentions Jesus. Every non-Christian and most Christian texts that mention Jesus were written by individuals who were born after the Biblical Jesus died. The Bible mentions historical events that archeological evidence indicates is accurate. But it doesn't follow that this means everything in the Bible is accurate. The same thing can be said about just about every religious text.

Since you answered so quickly, I'm assuming you didn't have time to read the work of either author I recommended. Once you've looked at the information they have compiled, I would welcome your feedback. If you still feel that there is no independent evidence that supports the biblical record, I'll be happy to discuss.

I think if you look carefully at the bibliographical information in particular in "Evidence That Demands a Verdict", you'll find some interesting threads to follow that will change your position regarding independent evidence.

I've read both authors you mentioned as well as scores of others who support or don't support the accuracy of the Bible. There is nothing new in McDowell's book. His "contemporary" sources for the historical Jesus are not contemporary. And even if one proves that Jesus is in fact an historical figure, it does not follow that Jesus is thus divine. Read Jeffrey Jay Lowder for a point-by-point rebutal of McDowell, though I also don't agree with every point Lowder makes. You should also read "Letters From Earth" by Mark Twain for one of the sharpest examinations of Christianity. Everyone always tries to boil these discussions down to an either-or proposition. This issue is so much bigger and more nuanced than that. The world would be a much better place if people of all or no faith would accept that no human has a monopoly on cosmic truth and that someone who disagrees with your spirital beliefs is not, by definition, a bad person.

First, the discussion of evidence was regarding evidence supporting Dan Brown's characterization of early Christian history, not of Christ's divinity. You wrote...

"I find it interesting that everyone says the fiction of The DaVinci Code obscures the "truth" of early Christian history even though there is as much independant evidence in support of Dan Brown's assertions as the assertions of the Christian church."

Third, the world would not be a better place without unequivocal truth, for without absolute truth, there can be no right or wrong. No right or wrong, no law. No law, no rule of law. Without absolute truth upon which to base a conscience, and without the rule of law to standardize conduct according to that conscience, the world would be a much darker place.

Finally, I know the IRS analogy wasn't great, but it was kind of funny. Could you just imagine putting a note on your tax return that read, "Sorry, I don't pay people I don't believe exist." The point is, truth is truth, regardless who believes it. Scripture actually says that few will believe and be saved, so I'm not surprised that there are more non-Christians than Christians. It was fortold thousands of years ago that such would be the case. Fortunately, truth is not determined by popular opinion.