In the newspaper business, sometimes things arrive too late to make it into the paper. That's what happened with what I'm going to share with you today. 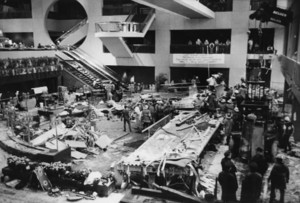 For my column last Saturday, I wrote about the crucial work that clergy do in times of disaster. One of the people I tried to reach was the Rev. James Flanagan, a Catholic priest who was living in Kansas City in 1981 when the skywalks of the Hyatt Hotel collapsed, killing more than 100 people (the hotel lobby is pictured here). He has since become the founder of the Society of Our Lady of the Most Holy Trinity, and spends much time in Rome.

So by the time I made contact with him and he replied to my e-mail asking him about his experiences in that disaster and the role of the clergy generally, it was too late to make it into the column. But I liked his reply so much that I wanted to share it with you. Here is most of it:

I will give you a run down on what happened within myself before the Hyatt disaster.

A few days before, within me there came an overwhelming realization of death. I asked God if I were to die and He said, "No." And, I asked him if anyone in Our Lady's Society for whom we were responsible for were to die, and He said, "No." I asked Him what he was teaching me, but He did not give me an answer.

Very shortly, about a day after, I received a call that there was a disaster at the Hyatt Regency since the walkways had fallen down upon the people, so I went immediately. I began immediately the work of caring for the people in both the sacramental way of anointing each and everybody who was taken from the ruins and also communicating with those who were trapped in the ruins. I asked God to give me something that would help me to care for His family and He indicated, "Whether they live or whether they die, they belong to me." In the strength of those words I was able to remain faithful to God until the afternoon of the next day.

There were many wonderful incidents of God's providence and care as well as the suffering and death of His Paschal Mystery in the lives of His people. I'm sure that God's people received His inspirations and His blessings during this whole disaster. And, you calling it a "theology of presence," is the truth that God does come to His people in these times, and as well brings His priests to serve as a witness to God's presence. The work of the priest in times of terrible disasters is always to witness in every way possible the fullness of the love that God has for His sons and daughters, and it brings great consolation and compassion to those who suffer. We come to a deep trust and confidence in God that He is fulfilling His divine plan for each and all of those who are suffering and dying at this time. I find that this is always present in wondrous manifestations of God.

I remember a mother and her daughter that were under the tons of cement and steel and we opened an opening for her to come out, but she wouldn't come out. She said, "Take my daughter out first, take her out first," and she actually wanted to care for her daughter. She didn't care about herself. We had to literally take her out because we could not get to the daughter until she was freed. Then the daughter was fine and was taken out.

It is wonderful at times such as this to see the beautiful gifts of Jesus that He gives to His people. The first gift is the gift of general absolution from all sin, which priests give in Jesus gift in the sacrament of penance to care for their spiritual needs.

Then there is the gift of the anointing of the sick that the priest gives because we do not know when the soul leaves the body so we give this gift conditionally if the person is still alive.

Then we give the gift of apostolic blessing that takes away any kind of effects of sin of anyone, and this enables them to go directly to God in heaven. And, then we ask Our Lady, herself to present them to God so that in God's willingness to grant all the requests of Our Lady, His judgment of them is always favorable.

I also found that in the lifting of the various ruins that we had to be very careful, and the Holy Spirit inspired us and at one point, I said to the men, "Here there is a whole area that has not been uncovered so we uncovered it, and there were about 14 people in there that we uncovered and many of their lives were saved, but some were seriously injured. Unfortunately many times, there are those who try to use these disasters for their own purposes and we pray for them asking God's forgiveness and pardon. We are also aware of many who were spared who offered great gratitude to God for being able to continue their lives, marriages and be with their families.

I hope this helps you to see how close God is to His people, especially in times of great need. And, I want to express my own gratitude for you asking these very real questions of God at work among His people, and may God bless your own work to bring this good news to His people.

In the Holy Family of Jesus, Mary, & Joseph,

Rev. Flanagan has some beautiful things to say about God's presence in times of disaster: "I began immediately the work of caring for the people," "Whether they live or whether they die, they belong to me (God)," "The work of the priest in times of terrible disasters is always to witness in every way possible the fullness of the love that God has for His sons and daughters."

However, Flanagan speaks a different language of faith than my own; his persistent use of masculine language for God, his thought of a "divine plan" that directly implicates God's agency in the violent deaths as the skywalks collapsed. I call these into question. These ideas obviously speak deeply to him, and to some others in his tradition.

In my congregation we speak of God in non-gendered terms, unless we are intentionally using a metaphor that is deepened by the use of masculine or feminine language. And we regard God's gift of creaturely freedom/agency/responsibility as a part of this universe, which cannot be reconciled with a "divine plan" except through the most tortured linguistic gymnastics.