My friend Stu Bykofsky, a great columnist at the Philadelphia Daily News, had a recent interview with, uh, God. You'd do well not to miss it.

In the past here in blogland, I have urged you to attend funerals whenever you have the chance. They are -- or at least can be -- marvelous examples of how faith communities work, how they surround families with love and support at terrible times, how they speak words of comfort and hope in the face of death and darkness and mystery. 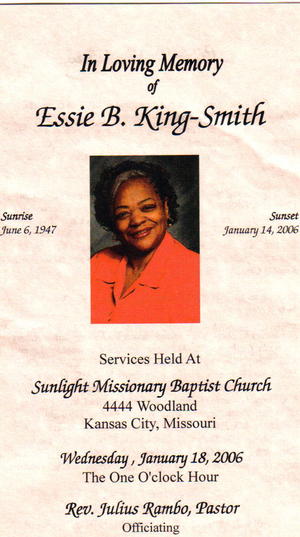 I went to another such funeral the other day that was a perfect example of what I never would have wanted to miss, even though the woman we celebrated -- a friend from my office named Essie -- is someone whose funeral I never expected to attend, at least not yet. She was two years younger than I am.

Her funeral was at her church, a predominantly black Baptist congregation in Kansas City, where she was active in many ways. Black Baptist churches don't do funerals the way mostly white Presbyterian churches (mine) do. Rather, the congregation responds to the music, the scripture, the preaching, the remembrances as though each person is being engaged in a one-on-one conversation, in which it would be impolite not to react aloud.

There was an organic sense of community there that day. The church, which understands itself to be the body of Christ, had come together both to mourn Essie's death and to celebrate Essie's life. So there were tears and there was laughter, moaning and loud praise. The place was rockin'.

As a white man, I've been to enough funerals at black churches to know what to expect, even if I still feel a little like an interloper. But Essie and I used to talk in the cafeteria. We used to wait together at the bus stop. We'd chat walking down the halls. She wasn't a close friend, but we liked each other and sometimes spoke of our faith together. So I felt right being present and I felt welcomed.

Besides, as I keep telling you, funerals are perhaps the best place to learn about life.