A controversial new Gospel of Judas (Judas? Yes, Judas) is about to be published. The theological questions this will raise are almost countless.

In honor of the late Rev. Martin Luther King Jr., the anniversary of whose birth we are celebrating, I have for you what I think will be a special treat -- several really fine pieces about King and his theology from the archives of Theology Today.

Well, I had hoped to link you directly to four different articles, but the Theology Today archives won't allow me to do that. However, I'll give you some directions below to get you to the pieces.

I have mentioned here before that I've been a subscriber to that quarterly for a long time. In fact, as you can see, the past volumes I've kept take up a whole shelf in my home office. Over the years I have read lots of excellent pieces (along with some that I found impenetrable). Among those that have stuck in my memory are several about King.

Thanks to the foresight of Ellen T. Charry, one of the quarterly's editors (now no longer in that position), Theology Today has created a large archive of its past issues. It's a marvelous service. Poke around in it some day. 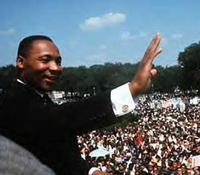 But, as I say, I can't link you to the pieces directly. Rather, I have to give you some directions for how to find what I'd like you to see. First, click here and you'll be taken to the quarterly's search function. Once there, type in "Martin and King" but without the quotes in the key words box. Then click on "Search Archives."

You will get a list of pieces. The four there I'd like to highlight are, in this order, the sixth one down, about King as a public theologian.

Next go to the top of the list for a review of a book by James H. Cone, Malcom & Martin & America: A Dream or a Nightmare.

Right below that is an article by Cone about King and the black church.

And just below that is a piece by Michael Dyson says King's death was the death of his own innocence.

I hope when you look for those that they come up in that order. If not, have fun hunting around and tell me what other treasures you found.

I never met King, though twice I heard his father speak, once in Rochester, N.Y., in the late 1960s and once at the 1976 Democratic National Convention in Madison Square Garden. But as Jimmy Carter used to say, King freed lots of white folks, too. Carter and I count ourselves among them.

Over the years I have asked this question and have been a bit surprised by the answers I have gotten. I believe that Dr. King was a prophet to our nation ... it is sad that much of our nation and the church is still confused about this.

If you read nothing else this weekend read Chuck Currie's blog (http://chuckcurrie.blogs.com/chuck_currie/2005/01/martin_luther_k.html) on "Martin Luther King Jr.