I get to do a little bragging today, but only in the interests of noting the good news that some people care enough about journalistic coverage of religion that they hand out prizes. 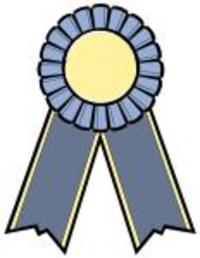 I've just learned that I've won a second-place award (pretend the ribbon you see here is red, not blue) this year from the American Academy of Religion for the "Best In-Depth Reporting on Religion" by media outlets with circulations of 100,000 or more. In the past, I've place both first and third in AAR competitions.

The American Academy of Religion is made up religious scholars, many of whom teach religion as an academic subject in secular universities.

One of the pieces I submitted eventually will be posted on the AAR Web site. When I put this blog entry together, I'd been told it would be the piece I'm sharing here with you today, which is this Kansas City Star column that I wrote in August 2004. But I've just learned that instead of this piece, the AAR Web site will feature a piece I wrote about new directions in research on the Apostle Paul. So you can go to the AAR site to find that and now you can read this one here:

DENNIS, Mass. - Zealous wind off Nantucket Sound shoves its way across the sand of Earle Road Beach here, causing the minister's white robe and green stole to ripple and twist.

This wedding, it occurs to me, is why we have ritual, tradition, repeatable liturgy. Dependable ceremony was invented especially for hard and wonderful times like this. It helps us know a little of what to expect when everything seems loose, in play and eager to ambush our wounded but hopeful hearts with wild emotions.

The bride today is Haven, the widow of my nephew Karleton. Almost three years ago terrorists killed Karleton and so many others by slamming the plane he was riding into the World Trade Center on Sept. 11, 2001.

It has been an astonishing time, full of grief over the loss of Karleton but with joy over the birth of Karelton's and Haven's second son eight months after 9/11. It also has been full of hope for Haven's healing and, finally, of the bittersweet but joyful acceptance of the fact that she would marry Dan, whose own sister lost her husband at the World Trade Center that malevolent day.

Today we have gathered under bright Cape Cod skies to embrace the new couple - new family - and to wish them well as they move into a future that we and they know offers no guarantees. And as we witness the ceremony, I'm glad that religion provides the comfort of form, of known words, of boundaries within which both our pain and our joy can find expression but be contained.

One of the first things the minister says is that both Dan and Haven want all of us to observe a moment of silence to remember and honor the ones we have loved so much but who are now gone. As we do that, seagulls hover overheard in the swift air and waves detonate on the sand. Still, we move inside that rumbling, restless silence and offer thanks for the ones we've lost - thanks still colored by a deep desire to shout, "Damn! Damn! Damn!"

The vows, the rings, the music, the homily, the kiss - all of it is choreographed so as not to alarm anyone with unwelcome surprises. My sister and her husband - Karleton's parents, Barbara and Jim - are sitting next to my wife and me, and I know they are grateful for the role ritual is playing today.

"The older I get, the more tradition I want," Barb told me not long ago.

So even though it will be hard, we will follow the family tradition and sing made-up songs - one silly, one serious - to Dan and Haven at their wedding reception. This will be the 11th time my sisters and our families have done such goofy singing at family weddings (it started when Karleton and Haven were married), and Haven insisted it wouldn't be a true wedding without it.

So we are gathered this weekend to talk, laugh, hug and sing our songs. All of this is liturgy (which literally means the work of the people), and it has to do with sacrament, an outer sign of some inner meaning, but a sign that brings about what it signifies.

The meaning for us is that even though Karleton's life has ended, ours hasn't, Haven's hasn't, their sons Jackson's and Parker's haven't. So, like other 9/11 families, we will set our faces to the future and, using ceremony, tradition, ritual and the liturgy of ordinary time, will make new lives for ourselves.

It's not that any of us can - or ever would - forget Karleton. Rather, it's that we know we are powerless to undo his death. If we wallow in this biting, awful loss, we would dishonor Karleton's lively, loving, exploratory spirit that was always eager to see what both the moment at hand and tomorrow might offer.

So we have come to rest our souls in the promise and comfort of ritual and tradition. It is how people get through birth, through worship, through marriage and the passages of aging, through death and the creation of lives without people who have died.

Sometimes ritual - especially the religious variety - becomes empty and meaningless, rote and without the pulsing vitality and rhythm that first gave it life.

But at its best, ceremony and tradition can carry us through the narrow channels that our hearts fear to enter. Which is how we are able to surround Dan and Haven with love today and help launch them on a new journey that will keep them connected to our lives.

If ritual can't help a family reconstitute itself, it is like salt that has lost its savor and must be thrown out and trampled under foot.