I think I'll take a day off of blogging today to celebrate. 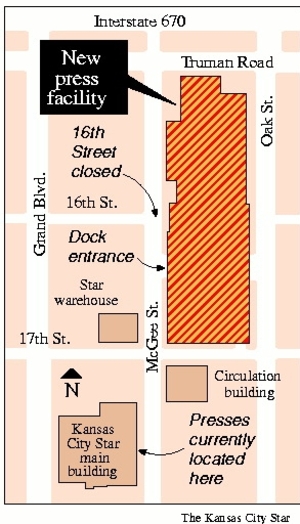 I first came to work at The Kansas City Star (the image here has to do with our new $199 million printing facility that will open next year) on this date 35 years ago, 1970. I had spent three years as a reporter for the now-defunct Rochester Times-Union in upstate New York before deciding to head back to the MIdwest.

What an amazingly different time that was. We were still in Vietnam, we were just over a year from the first manned moon landing, we didn't know a thing about any Watergate scandal, it had only been 25 years since the Chicago Cubs had been in a World Series and I was having precious little to do with religion. Now it's been 60 years since my Cubbies were in the World Series, we've been through the countless NASA triumphs and disasters, we've experienced so many political scandals I get sick thinking about them and I'm an elder in a Presbyterian church and spend my journalism career writing about faith matters.

I've had the privilege as a reporter and columnist at The Star to help tell some of those -- and many other stories. I don't know how long I'll continue doing that, but some days it's good just to take a breather, look back, listen (as author Frederick Buechner says) to your life and celebrate.

So I'm going to take myself out to lunch today or something and, while I'm at it, express gratitude for the ways these 35 years have blessed me.